Disgraced is one of those rare plays that has such emotional intensity, verbal economy and examination of complex issues and people that it leaves you infuriated, exhilarated and exhausted. In the ninety minutes it takes to perform the play, it builds up to an extraordinary climactic scene that will stay with you for a long time.

Amir (Raoul Bhaneja) is the classic American success story. He is a lawyer working in mergers and acquisitions and lives in swank apartment in New York’s Upper East Side. His wife Emily (Birgitte Solem) is blonde, beautiful, ambitious and a talented artist. 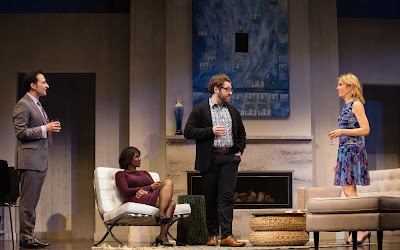 Raoul Bhaneja, Karen Glave, Michael Rubenfeld and Birgitte Solem in DISGRACED. Photo Credit: Cylla von Tiedemann
She has a deep and sensitive understanding of the intricacies and beauty of Muslim art. Amir looks at Muslims the way many Americans, French and Belgians would regard them today. Amir is a lapsed Muslim who is on his way up the legal profession ladder and he looks like a liberal American who wants nothing to do with radical Muslims. He thinks the Koran is nothing but a hate letter.

But not quite. Amir in the end admits that he felt pride on September 11th and he likes hearing about Iran wanting to push Israel into the Mediterranean and wipe it off the face of the earth. He has tried hard to assimilate himself but his integration may be superficial. The play was first produced in 2012 but it is as relevant as if it were written yesterday.

Bur his wife wants the world to know about the superiority of Muslim art and has her own ideas about the Koran and Muslim culture.

Isaac (Michael Rubenfeld) is a Jewish art dealer who is attracted to Emily and has his own views. He is married to Jory (Karen Glave) a black lawyer who is working in the same Jewish firm as Amir and competing for the same prize – partnership in the firm. We also have Amir’s young nephew Abe (Ali Momen) who changed his name from Hussein in a desperate attempt at assimilation.

That is a long list of issues but the play tackles them with dexterity and dramatic agility leading to the all-important climactic scene.

The success of the production lies in the pace that director Robert Ross Parker establishes and maintains. Bhaneja does a good job as the passionate secularist American who turns out to have something quite different embedded in his soul.

That “something different” is embedded in the souls of the Jewish Isaac, the black Jory and the Muslim Abe and watching that “something” ripped out and exposed is part of the outstanding dramatic effect of the play.

Akhtar does not mince his words when he looks at the West’s conflict with the Muslims. The issue is presented so even-handedly and humanely that a disgusting bigot like Donald Trump would nod at some of its views and many Muslims would applaud parts of its analysis. But it is an intelligent play and fine theatre and not something that Trump would understand.
Posted by James Karas at 7:02 PM