An opera company can’t lose by producing Bizet’s Carmen with its tragic plot and familiar music but it is difficult to be completely successful. That summarizes the “success” of the Canadian Opera Company’s current production.

I saw the performance of April 20 and the singing ranged from the good to the adequate. The staging and costumes can bear the same description with unalloyed cheers for the chorus and the Canadian Opera Company Orchestra under the baton of Paolo Carignani. 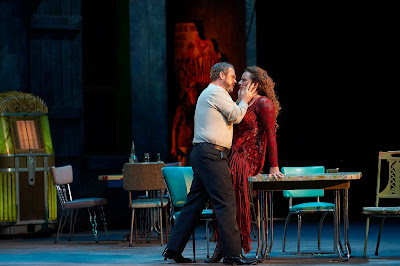 Clémentine Margaine as Carmen and David Pomeroy as Don José.
Photo: Michael Cooper
Carmen, the gypsy, the cigarette girl, the femme fatale who ensnares men at will and spits them out like used gum when she tires of them, is a woman embedded in our imagination. The details may vary but all of us possess a Carmen in our souls. That means heaven help the singer who takes on the role.

French mezzo-soprano Clémentine Margaine starts as a tame Carmen with little passion, and even less sexual magnetism. Singing accurately is not enough. Wearing a frumpy dress and with rather limited movements in the first act, she does not convince us that she can lure Corporal Don José (David Pomeroy) into a life of crime.

In the second act at Lillas Pastia’s tavern, Carmen is called to dance for Don José but unfortunately dancing is not Margaine’s great forte. She throws her arms up in the air and does a few twirls to the languid music but it is not quite the real thing.

But Margaine and the entire production do come together in a triumphal finish at the end. Don José begins by pleading and expressing his love for Carmen outside the bullring while she stands firm in her rejection. He goes crazy with passion and jealousy while she vocalizes her independence and freedom until he strikes her with his dagger.

Canadian tenor David Pomeroy did not always soar but rose to the demands of the role in the Flower Song in the tavern where he expresses his longing for Carmen and he is at his best in the final scene where he moves from lyrical pleading to murderous despair.

Canadian soprano Karine Boucher was a sweet Micaela with a shimmering voice that was occasionally in danger of being drowned by the orchestra. American baritone Zachary Nelson was Escamillo, the toreador. He was in good voice and delivered a fine “Toreador, Toreador”. 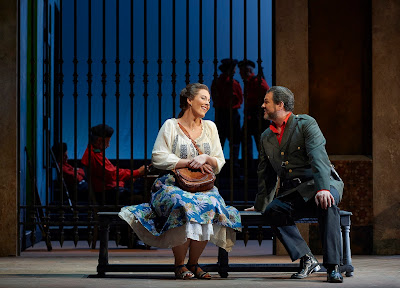 Karine Boucher as Micaëla and David Pomeroy as Don José. Photo: Michael Cooper
Director Joel Ivany and Set Designer Michael Yeargan came up with some interesting staging ideas. In the first scene, there is a wrought iron fence separating the city square from the army barracks. Most of the action takes place in the square where people come and go and children march and sing. Why is a significant portion of the stage blocked off by the fence?

The third act in the smugglers’ lair in the mountains is appropriately dark and foreboding.

The final scene is staged quite magnificently. Women selling flowers, programmes, oranges and whatnots outside the bullring appear in some of the aisles of the theatre. Picadors, toreros and banderillos come down the aisle and go on the stage as does Escamillo making his grand entrance.

The hordes of people going to the bullfight usually enter the bullring and disappear. In this production we see the spectators watching the bullfight as the tragic event between Carmen and Don José is enacted. Very effective.