Chimerica has a great subject and an outstanding opening scene. Joe (Evan Buliung), a young photojournalist, is stuck in his hotel room in Beijing during the Tiananmen Square massacres. He is talking with his editor about getting out of China when he sees a man in a white shirt carrying two shopping bags step in front of a row of tanks. A miracle happens. The Tank Man, as he becomes known, is not killed. The photographer takes some pictures and manages to hide the film before the police breakdown his door and wreck his camera. It’s all fictional but very dramatic. 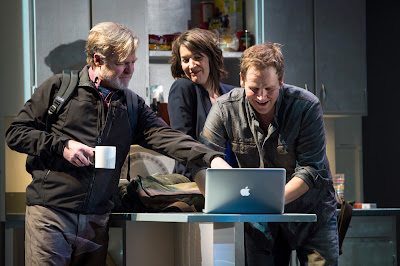 The photograph of the Tank Man and the massacre of June 1989 in Tiananmen Square have become powerful symbols of the repressive brutality of the Communist regime of China. And it happened while the most populous nation in the world was growing economically at a phenomenal pace to the extent that its economy is only second to that of the United Sates. The play’s title is a syncopation of the words China and America in case someone missed it.

The next scene takes place twenty three years later when the young photographer is on an airplane going back to China and, following a tip, has embarked on a search for the identity of the Tank Man.

From then on the play follows two plot strands: finding the identity of the Tank Man and commenting on China, the United Sates and a number of topics from the state of newspapers to the morality of journalists.

The production has a revolving stage for the numerous scenes that gives the feeling of a revolving door play. Some scenes last no more than a few seconds while others are much longer. The play moves between New York and China as Joe, ethically and unethically, tries to find his quarry. We have a mystery clothed in international politics with many current political and social references. The “current” references are from 2012 when Hilary Clinton was campaigning for the Democratic Party nomination for president and today, four years later, she is doing precisely the same thing.

The secret police, the torture, the lack of human rights and the projected videos give a damning picture of China’s political system. Economic progress is accompanied by pollution and smog which are officially denied. There is only fog, says the government, and any suggestion that smog has reached unsafe levels, is simply propaganda.

Evan Buliung exudes youthful and at times irresponsible enthusiasm and passion in his search for the Tank Man. He crosses ethical lines, is thrown in jail and has an erratic affair with Tessa, a market researcher.

Laura Condlin  does a good job as Tessa even if she could not quite produce a convincing English accent.

The play has some 37 scenes and uses projected videos and opaque glass in some of them. The cast of twelve play more than thirty roles and among the often noisy background and shifting scenes you need to be on your toes to follow all the twists and turns of the plots. Kirkwood has written in quite a bit of humour but in this production it almost never worked. Most of the lines simply misfired although there were a few that produced the appropriate laughter.

Kirkwood is nothing if not ambitious. She takes on issues such photojournalism, the state of newspapers, international trade, human rights, Sino-American relations and personal relationships. Unfortunately in this production, directed by Chris Abraham, things get bogged down. There is speed without momentum or clarity and the result is only an average night at the theatre.
Posted by James Karas at 2:00 PM