David Hare chose a few hours in Oscar Wilde’s life to construct his idiosyncratic and highly entertaining play The Judas Kiss. It was first performed in 1998 and the 2012 Hampstead Theatre revival has reached Toronto making for a superb night at the theatre. And it is not just because Rupert Everett is the star of the show but we can be sure that he does no harm. 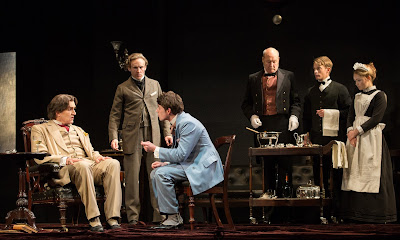 Rupert Everett, Cal MacAninch, Charlie Rowe, Alister Cameron, Elliot Balchin and
Jessie Hills in The Judas Kiss ©2016, Cylla von Tiedemann
The first act is set in London in April 1895, a few hours before Wilde is arrested for, as they used to say, gross indecency. He is in love with Lord Alfred Douglas, “Bosie” (Charlie Rowe) whose father, the Marquess of Queensbury, wants to put an end to the relationship. Wilde’s lawsuit against Queensbury for libel has collapsed and he has talked himself into being charged with a criminal offence.

Hare gives us a sketch of Wilde’s character and the life style that he is pursuing. His relationships with young male prostitutes and extravagant lifestyle and are about to end and there is almost certain danger of Wilde landing in jail. Robert Ross (Cal MacAninch), his friend and first homosexual lover, urges Wilde to leave England immediately. Bosie insists that he stay.

Wilde, in Everett’s superb performance, through posed indifference, braggadocio, fatalism and perhaps a sense that his own future is out of his control as if it were a Greek tragedy, decides to stay. The consequences of course are conviction, two years of imprisonment at hard labour and the destruction of Oscar Wilde.

The second act is set in Naples in December 1897. Wilde still has his wicked wit but he is a broken man. He has put on weight and hardly moves. Bosie is still pursuing casual sex, this time with a well-endowed and displayed fisherman called Galileo (Tom Colley) who has a few lines in Italian. They are broke and Bosie decides to leave Wilde with a promise of money from his mother. Wilde reminds him that Jesus was betrayed by Judas, a stranger. He should have been betrayed by John, the apostle that he truly loved. The irony is lost on no one.

Rowe’s Douglas is shallow, petulant, feckless and selfish. Wilde seems to have genuine affection for him and if he listens to anyone he listens to him rather than Ross in deciding to stay in England rather than taking the more prudent road.

MacAninch’s Ross is thoughtful, decent and protective of Wilde but the latter is too obsessed with Bosie to be swayed by sensible advice.

Hare has three hotel workers in the first act and they provide considerable humour. The maid Phoebe (Jessie Mills) and Arthur (Elliot Balchin) open the play with some vigorous love making in the hotel room which is suddenly terminated by their supervisor Sandy Moffatt (Alister Cameron). The three make several appearances during the first act and are very funny.

Director Neil Armfield does terrific work in bringing out the complexities of the characters and the issues involved.

The set by Dale Ferguson consists of a large bed and some furniture in the first act. There is a large, purple curtain over the bed that is supposed to give the hotel room a plush appearance. It doesn’t because there is not much else in the room. 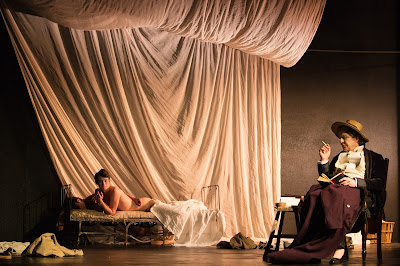 Charlie Rowe and Rupert Everett in The Judas Kiss ©2016, Cylla von Tiedemann
For the second act in Naples the bed becomes a cot and the purple curtain becomes beige but there is no indication of location. The large barren wall of the first act remains unchanged and the set can only be described as barely functional.

You don’t see the play for the set. The performers in general and Everett in particular give us a Hare’s choice of Wilde’s character and several scenes from his life that are highly affecting with flashes of wit, humour and pathos.