Continues in repertory at the Royal George Theatre,
Niagara-on-the-Lake until October 23, 2016. www.shawfest.com

Does Eda Holmes wish that Mrs Warren’s Profession was written by Thornton Wilder instead of Bernard Shaw?

Her production of Shaw’s third play bears some remarkable resemblances to Our Town which has a character called Stage Manager who tells us what is going on and participates in the action. 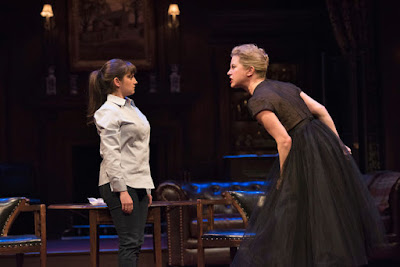 Jennifer Dzialoszynski and Nicole Underhay. Photo: David Cooper
Holmes adds a Prologue to Mrs Warren’s Profession which she sets in 2016 in The New Lyric Gentlemen’s Club. Several members of the club tell us that there will be a reading of Shaw’s play and after a few introductory remarks the play as Shaw wrote it begins. The entire play is done in the club but the actors do explain to us what the set as described by Shaw is supposed to be.

The play is in fact set in a cottage and a rectory garden in Surrey as well as chambers in London and I am not sure what is added to our appreciation of it by placing it in a posh gentlemen’s club that most of us cannot possibly relate to.

Mrs Warren’s Profession is about the disgraceful working conditions for women in 19th century England which forced many of them into prostitution. The word is never mentioned and although we are given some information about the conditions that forced Mrs. Warren to sell her body we see nothing in the least bit tawdry.

Mrs Warren may have started as a desperate pretty girl doing tricks but she rose up the ladder of the oldest profession into management and partnership on a multinational scale. With her partner Sir George Crofts she has become wealthy and raised a daughter who was sent to Oxford University, is living well and does not have a clue about what her mother is doing.

Nicole Underhay as Mrs. Warren is a self-assured, handsome, well-dressed woman who exudes success and self-satisfaction. She has raised her daughter Vivie with all the comforts that money can buy but kept her in the dark about everything, including the name of her father. Mrs. Warren’s world comes crashing around her when she is rejected by Vivie and Underhay gives a superb performance especially in the final scene when she tries to defend her actions.

Jennifer Dzialoszynski, dressed casually in slacks, is a free-spirited young woman who is courted by the feckless Frank Gardner. Life is good until she finds out the source of the funds for it. She rejects everything including her mother and goes to work. Dzialoszynski displays Vivie’s strength and resolve convincingly in a fine performance but the character she portrays is more a humourless, puritanical prig than an example that any woman would particularly wish to emulate.

Wade Bogert-Obrien’s Frank Gardner and Shawn Wright’s Reverend Samuel Gardner are portraits of useless men who are comical in their ineptness. But the Reverend, who buys his sermons, and is a pillar of the community, is also a prime example of its hypocrisy. Who is Vivie’s father?

The most interesting man is Sir George Crofts played by Thom Marriott. The baronet is prepared to use and abuse women with the self-delusion that he is providing decent employment. The profits are good and neither he nor his partners are willing to give them up. The imposing Crofts of Marriott is all outward politeness, the epitome of hypocrisy, with a much darker side just below the skin. His defence is that everybody is corrupt so why should he not do the same.

The splendidly panelled interior of The New Lyric Club designed by Patrick Clark takes us away from the idyllic setting of the cottage garden and the rectory garden. The contrast between the English countryside and Mrs. Warren’s profession is more potent than the contrast between a men’s club putting on the reading of a play and the fate of women in the 19th century.

The acting is done well as described except for the accents. The cast sounded as if they are immigrants to England trying to speak with a respectable accent but falling short of success much of the time.