The 2016 season of the Stratford Festival is officially under way with a production of Macbeth directed by Antoni Cimolino. With witches, apparitions and ghosts in the cast not to mention battles, murders and madness, Macbeth provides great opportunities for a director to parade his talents. The Festival’s Artistic Director does not lose a single chance to display his marvelous imagination, his attention to detail, his innate theatricality and his ability to surprise us at every turn. 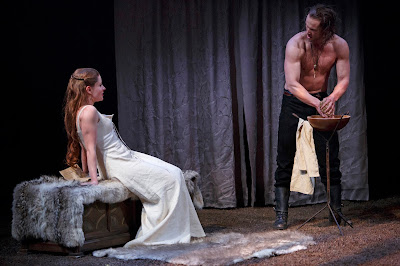 Krystin Pellerin as Lady Macbeth and Ian Lake as Macbeth in Macbeth. Photography by David Hou.


Macbeth opens in the middle of a battle (Cimolino’s idea) where the Three Witches agree to meet Macbeth upon the heath. A well-played and well-designed scene without any attempt to overdo what is already dramatic.

Cimolino and Designer Julie Fox can orchestrate a scene change in the time it takes for the lights to go off and on again. At the end of the scene where the murderers attack Banquo, for example, in their botched attempt to kill him and his son in the dark, the lights go down and on again. In that miniscule interval the scene has changed from the murder venue to the brightly lit banquet scene with the table and guests in place.  One of many coups de théâtre.

The entrance of the ghost of Banquo in the Banquet Scene is quite effective but Cimolino goes one step further by having the ghost of Duncan, the murdered king walk on the table.

The scene where the apparitions appear is staged skillfully with the frightful creatures rearing their heads from a cauldron and the suddenly disappearing.

Cimolino is not quite as lucky with his cast. Ian Lake is in his seventh season with the Festival but one wonders if he is quite ready for the role of Macbeth. He spoke some of the dramatic lines of the murderous king almost matter-of-factly. He rose to some dramatic heights but his voice never resonated with Shakespeare’s poetic language. 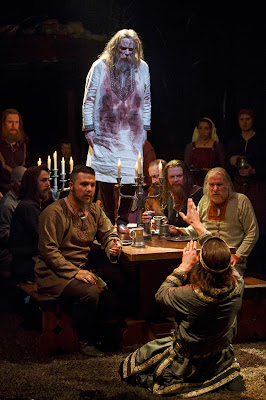 Members of the company in Macbeth. Photography by David Hou.
Cimolino adds a nice touch to the relationship between Macbeth and Lady Macbeth. They meet in their bedroom upon Macbeth’s return to his castle to announce the coming of Duncan. Macbeth takes off his upper clothes to display his muscular body. There is a strong sexual attraction between the two as well as a hunger for power.

The Porter (Cyrus Lane) is supposed to be funny but that happens more in theory than on stage. In this production he garnered a few genuine laughs.

Michael Blake delivers a solid performance as Macduff. Sarah Afful as Lady Macduff and Oliver Neudorf as Young Macduff get us through the scene before they are murdered with ease. It is a scene that easily descends into bathos and saying that they did a good job at it is no small compliment.

In the final scene, Macduff produces Macbeth’s severed head and everyone celebrates the recognition of Malcom as the new king. As the crowd gathers around Malcolm, we see the faces of the Three Witches. We started with these weird sisters and they deserve special mention as played by Brigit Wilson, Deidre Gillard-Rowlings and Lenise Antoine Shelley. They are just what their attendant spirits and an attentive audience ordered. And with them we are back where we started.
Posted by James Karas at 2:30 PM