THE TESTAMENT OF MARY – REVIEW OF SOULPEPPER PRODUCTION OF TÓIBÍN PLAY

The Testament of Mary by Colm Tóibín
Directed by Aaron Willis
Nancy Palk as Mary
Continues at the Young Centre for the Performing Arts,
55 Tank House Lane, Toronto, Ontario, until June 18, 2016, www.soulpepper.ca

**** (out of five)
The Testament of Mary is a one-actor play about the Virgin Mary played by Nancy Palk at the Young Centre.

What can one say about a woman who is revered and loved by millions of Christians as the Mother of God, Ever Virgin, All Holy and an approachable figure who can intercede with God and Jesus? No doubt there is controversy about her status in some churches but in the Eastern Orthodox Church there is only devotion and prayer to her.

Tóibín lets Mary relate her story. There are some light touches as in her views of the apostles as misfits and her comment about how she conceived Jesus. She knows well what happened she tells us and there is laughter.

But there is pathos when she tells us about seeing her Son on the cross. She in fact asks how long it takes for someone to die on the cross and is told it can take hours or days.

Mary is an elderly woman and she remembers certain things but not the way some of those “misfits” who have become Evangelists want her to remember. Her Son she is told will save people and grant them eternal life. “Save them from what?” she asks.

She is pestered by them for information that fits their conception of the Great Man and the difference He will make to the world. 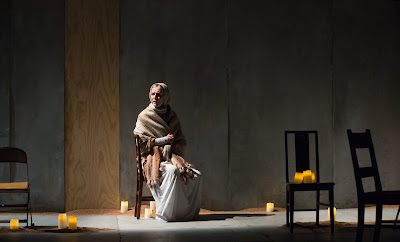 Nancy Palk as Mary. Photo: Cylla von Tiedemann
Palk does a superb job in the role. She modulates her voice, shows anger and pain but above all she shows humanity. Tóibín avoids the most obvious pitfall in dealing with Mary and that is sentimentality.

The set by Lorenzo Savoini consists of some chairs and tables and candles. The door to her room bangs loudly on occasion as the intruding writers of the Gospels come to pester her for information. I am not sure we needed all that clanging. Mary reminds us that none of them attended the Crucifixion.

The Testament is based on Tóibín’s novella of the same name and we gain a great deal by hearing Palk’s marvelous voice and watching her  perform parts of the book. The emotional intensity of her performance does not require as much movement and noise as director Aaron Willis provides but it is nonetheless a stellar production
Posted by James Karas at 10:51 AM