THE HEIDI CHRONICLES – REVIEW OF SOULPEPPER PRODUCTION OF WASSERSTEIN PLAY

The Heidi Chronicles was written more than a quarter century ago and it covers the era of the baby boomers from the 1960’s to the late 1980’s. Wasserstein’s baby boomers are mostly very smart, well-educated and highly successful New Yorkers who are liberals, campaign for Eugene McCarthy, and are deeply concerned with women’s lib. 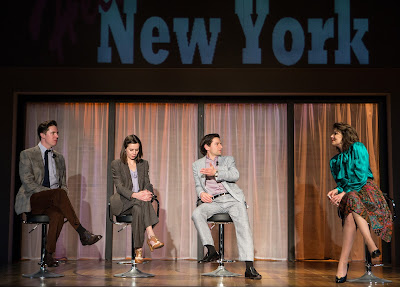 Damien Atkins, Michelle Monteith, Jordan Pettle and Laura Condlln. Photo Cylla von Tiedemann
Twenty-five years after the play was written and many more years since the baby boomers were in their prime the language of discourse and generations have changed. Equality between the sexes has not been reached but things have improved. Liberal causes have become almost anathema after Tea Party ideology and worse have high jacked the Republican Party. In any event, all social problems tend to be like the Lernaean Hydra, the vicious nine-headed serpent of Greek mythology; you cut one off one head, two others grow back. And so it is with the social issues of the baby boomers. The issues they espoused may have evolved but they are still with us albeit in different forms.


We follow Wasserstein’s baby boomers from their teens in the 1960’s to successful but hardly fulfilled people in their forties. Heidi and Susan whom we meet as awkward teenagers grow up into successful women without finding the fulfillment they so eagerly seek. Heidi becomes a prominent historian of art at Columbia University. The other men and women in the play are all successful and most people would love to have their problems.


The play opens in a lecture hall in New York in 1989 and Heidi is giving a lecture about women painters. She mentions several and notes that a standard text on art history mentioned no women artists from the dawn of time to the present. 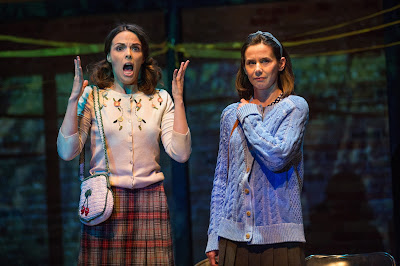 Sarah Wilson and Michelle Monteith. Photo: Cylla von Tiedemann
The play consists of about a dozen scenes and there is considerable wit, humour, intelligent repartee and dramatic scenes as the characters of the women and two leading men are developed.


Unfortunately, very little of it resonated with me and I think most of the audience on opening night. Most of us in the theatre are baby boomers and one wonders if the language and causes of that era have left us indifferent?  The actors try to generate energy and humour and especially at the beginning most of their efforts fall flat.


Things do improve as the performance progresses but the feeling of disassociation never completely abandoned me.


Michelle Monteith as Heidi was sallow and passive as the brilliant art historian who is keenly aware of women’s position but falls in love with the philandering Scoop Rosenbaum, an editor and magazine publisher. Jordan Pettle is highly energetic and witty as the self-assured Scoop. Sarah Wilson plays the sensitive, idealistic Susan, Heidi’s best friend, who becomes a studio executive in the end.


The most attractive character is perhaps Damien Atkins as Peter Patrone, a gay pediatrician who combines wit, humanity and friendship and is a true mensch.


Gregory Prest is making his directorial debut and kudos to Artistic Director Albert Schultz for promoting talent from within the company. One gets the feeling that Prest is trying a bit too hard. In the TV Studio scene he has the host April (Laura Condlln) overacting abominably for the sake of some laughs that simply do not materialize. Other scenes work quite well like Heidi’s speech to Miss Crain’s School Alumnae Association.


Wasserstein wrote ten other plays. Perhaps Soulpepper can produce a few more of them in the coming seasons?
Posted by James Karas at 3:04 AM