THE ODD COUPLE – REVIEW OF SOULPEPPER PRODUCTION OF SIMON CLASSIC

The Odd Couple is a very funny play that receives a funny production by Soulpepper. This is a revival of Soulpepper’s 2011 production which in turn was a revival of its 2008 staging. The play was first produced in 1965 and it has held its own for more than half a century. That’s an understatement because The Odd Couple has become a whole industry with Felix the news writer and Oscar the sports reporter going through numerous transformations and incarnations. 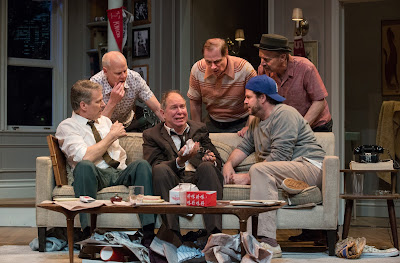 Kevin Bundy, Oliver Dennis, Diego Matamoros, Derek Boyes, Albert Schultz & John Jarvis. Photo Cylla von Tiedemann
It is all about male friendship among people who range from incompatible to utterly different in temperament and approach to life. The odd couple is Oscar, a divorced slob, irresponsible, irrepressible and impossible, and Felix, a neurotic neat freak who has so many idiosyncrasies and eccentricities that they would try the patience of Job. But the six men who play poker every Friday are bonded by friendship despite all their differences.

Stuart Hughes does a god job in directing Soulpepper stalwarts and gets most of the laughs from the play. But the qualification of this being a funny production of a very funny play stands.

Albert Schultz has the role of Oscar under his belt and he produces sound laughter while Diego Matamoros as Felix drives him crazy. Simon has drawn the two characters with amazingly funny but also iconic differences making the play both an easy comedy to produce but a tough one to triumph with. 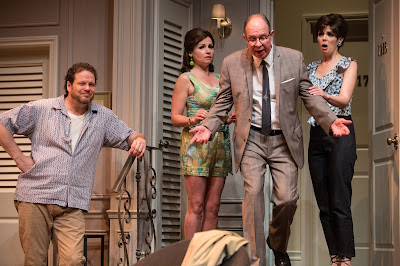 Albert Schultz, Raquel Duffy, Diego Matamoros & Sarah Wilson. Photo Cylla von Tiedemann
There is not much issue to be taken with the other four men around the poker table but I felt that Oliver Dennis was miscast as Murray the cop. Dennis is a very nice guy and somehow I expect a New York cop to exude more authority than decency.

Raquel Duffy and Sarah Wilson were very good as the ditzy English sisters. They had decent accents but I don’t think it was necessary to have the men attempt New York accents. I would have been just as happy if the spoke in their Canadian accents whatever that may be.

In the end however what was missing was the chemistry of superior comedy. For much of the performance I felt the action was carried by the play rather than the director and the actors carrying the play as if it were the first time we were seeing it.

All griping aside, you will laugh and enjoy your outing. The real complaint is why not produce a play that we have not seen at Soulpepper before?
Posted by James Karas at 9:32 PM