CORIOLANUS – REVIEW OF DONMAR PRODUCTION LIVE FROM THE NATIONAL THEATRE 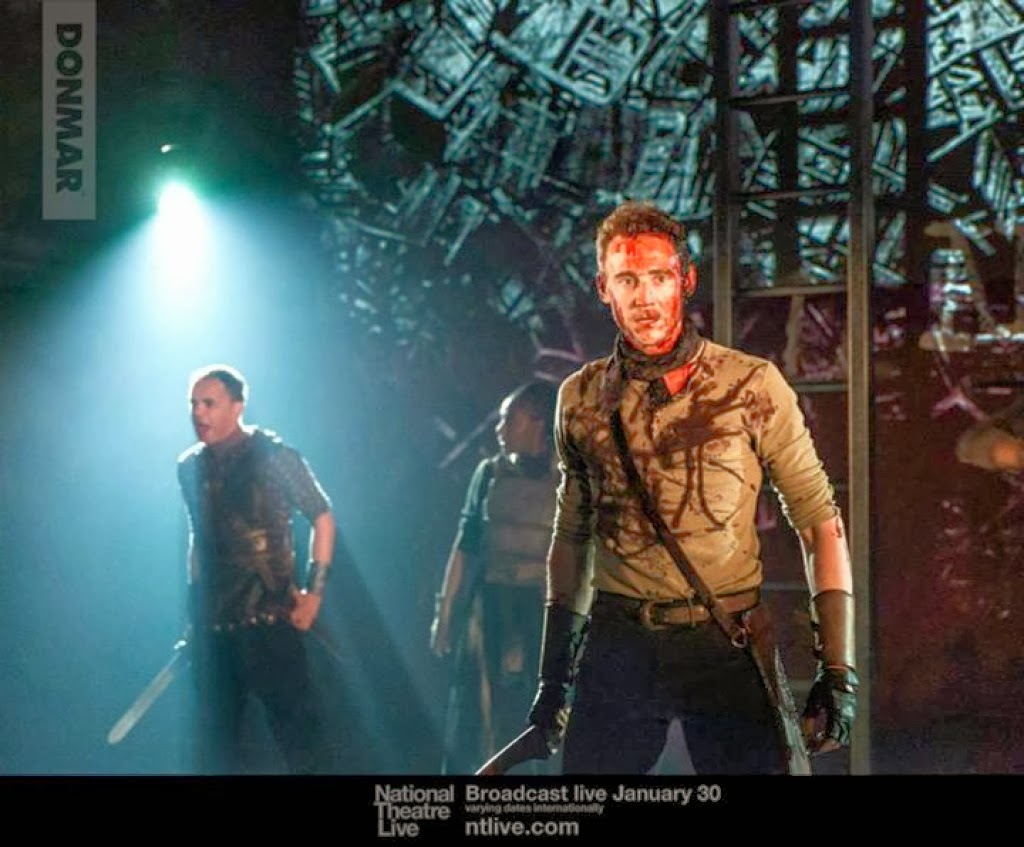 Coriolanus is a sprawling play with numerous scene changes from the streets of Rome and Carioli, to army camps, and to other exterior and interior scenes. It has about sixty characters and is performed much less frequently than Shakespeare’s other Roma plays. It is not an easy piece to produce.

What can you get in a tiny theatre like London’s Donmar Warehouse (capacity 251) with a brilliant director and a first rate cast of fourteen actors? A great deal, in fact. You will get a taut, sinewy production that brings out the strengths of the play even if you are sitting in a movie theatre and witnessing a National Theatre Live telecast.

Director Josie Rourke has edited the play to its essentials by deleting or doubling up the minor characters. Citizens, senators, conspirators, servicemen, lords, officers - all are played by three ensemble actors, if at all.  The production gains much by not having a horde on stage and is thus able to transition from one scene to the next quickly and seamlessly.

The key to the play is the character of Coriolanus and his interplay with the citizens of Rome, his family and the enemy Volscians, especially their general, Tullus Aufidius.

Coriolanus (played by Tome Hiddleston in an extraordinary performance) is a war machine who slaughters for glory and country. Rourke has him covered in blood and that is the only time when Coriolanus feels at ease. Hiddleston is young, athletic and portrays the brave, arrogant and somewhat psychotic Coriolanus to perfection. Coriolanus professes love of country but his real and perhaps only love is martial glory that can only be gained through immense courage and slaughter on the battlefield.

His character is complemented by his mother, the powerful and equally ambitious Volumnia played by Deborah Findlay. Volumnia is a woman only because of her fixtures but that forces her to live for glory vicariously. Her son is the product of her ambitions and in the end she is the only one that can sway him. Findlay is equal to the role and she exudes power, authority and cunning.

The stunning-looking Birgitte Hjort Sørensen plays Virgilia, Coriolanus’s hapless wife. She is stuck between the mother-son vice and does not have any wiggle room to influence anything.

The source of glory for Coriolanus is Aufidius (Hadley Fraser), the leader of the enemy Volscians. He is the mirror image of Coriolanus as a war machine but has been repeatedly defeated by the Roman. Coriolanus, in act of ultimate treachery, goes to join the Volscians and kneels before Aufidius. Aufidius falls on his knees and kisses Coriolanus on the lips. A brilliant touch by Rourke.

Coriolanus despises the Roman plebeians with a visceral hatred that is almost matched by his opinion of the upper class. Rourke presents both the lower and upper crusts with economy and effectiveness and I think we see Coriolanus’s psychotic side more easily than if we head a huge crowd on the stage.

Menenius (Mark Gatiss) stands uneasily among the blood thirst, arrogance, fanaticism and hideous conduct as the voice of reason, decency and tolerance. He does not stand a chance.

The set by Lucy Osborne consisting largely of a back wall painted red with graffiti on it suggests a protest movement in a modern city. The costumes are modified modern meaning that some of the military uniforms hark back to another age whereas the rest of the clothing can be seen on the streets.

Rourke scores a final and stunning touch at the end of the performance. Coriolanus is stabbed and hanged by his feet. Aufidius stands underneath the bleeding corpse and the blood spills on his face. The two war lords are joined together inextricably.
_____

Coriolanus by William Shakespeare was shown at the Cineplex Cinemas Yong-Dundas, 10 Dundas St. East, Toronto ON and other theatres on January 30 2014. For more information visit:  http://www.cineplex.com/