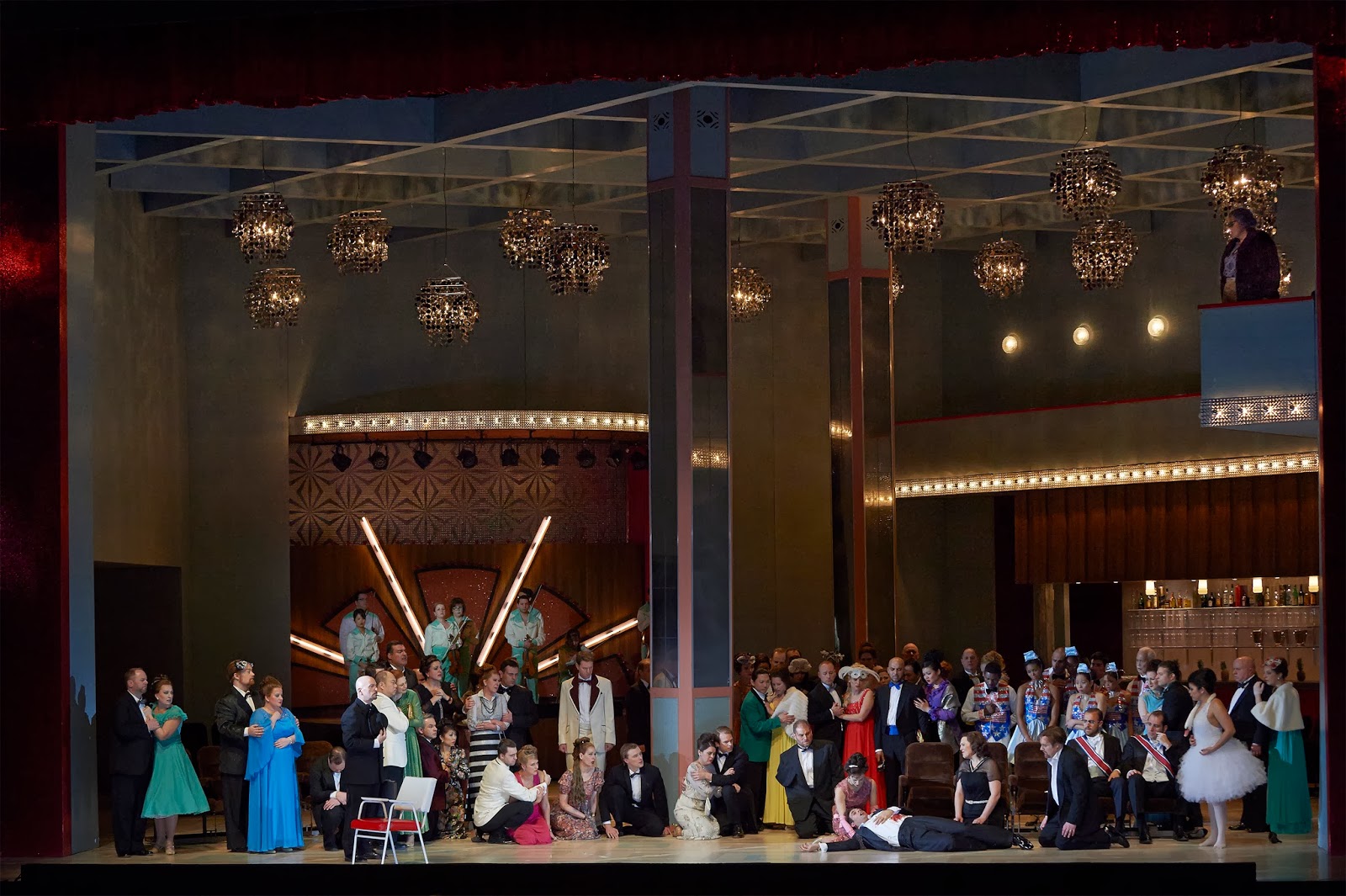 During the curtain calls for the Canadian Opera Company’s production of A Masked Ball at the Four Seasons, the man behind me blurted out a “boo” with such force that it startled me. Vocal disapproval of a performance or a production is not unusual in opera, but this one seemed more ferocious than most. Before we get to that barbaric review, let’s give praise where it is deserved.

Let us praise Canadian soprano Adrianne Pieczonka for a moving, vocally stunning and flawless performance. She is Amelia, the hapless wife who falls in love with Riccardo (Dimitri Pittas) but does not want to be unfaithful to her husband Renato (Roland Wood).

Amelia and Riccardo meet in a graveyard at night and sing the gorgeous and lengthy duet “Teco io sto.” It moves from the breathless, to the ecstatic, to the sublime and makes huge demands on the soprano and the tenor. The duet displays an outstanding soprano meeting the emotional and vocal demands and, unfortunately, the comparative inability of Pittas to match her. It’s not that he has a bad voice; it’s just that he cannot keep up with Pieczonka.

For an outpouring of emotion and vocal splendour, her rendition of “Morro, ma prima” where she pleads for her husband to see her son before he kills her is simply outstanding.

Dimitri Pittas has a good voice at midrange but he cannot soar to the high notes as effortlessly as a first-rate tenor should. He does not have a particularly big voice and although he can do well in certain roles when paired up with a Pieczonka he simply does not measure up.

Roland Wood has a rich baritone voice and his Renato, the would-be-jilted husband of Amelia is very good. He moves from faithful servant and best friend of Riccardo to murderously jealous husband and assassin.

Mezzo-soprano Elena Manistina has the meaty role of Ulrica a.k.a. Mme Arvidson (check name of hotel below). She has a couple of dramatic arias that she delivered with relish but she was ill-served by a sorceress’s den that looked like a hotel basement.

Soprano Simone Osborne played and sang a perky Oscar. He/she is Riccardo’s attendant who unwittingly betrays his master’s costume at the ball.

Directors Jossi Wieler and Sergio Morabito created this production for Berlin’s Staatsoper Unter den Linden. The opera was originally set in Sweden and involved the assassination of a king. On the objections of the censor, the locale was changed to colonial Boston. Wieler and Morabito decided to move the action to 1950s America and squeeze a political scenario about a wise and benevolent leader concerned with racial issues and social justice while practicing infidelity. If they had called Riccardo Kennedy everyone one would have got the message without reading the programme notes. The interpretation, if you can call it that, is at best a stretcher.

The set by designer Barbara Ehnes represents the United States in the 1950's. It is meant to be the ballroom of the Arvedson Palace Hotel. On the left there is a stage at the back; on the right rear there is a bar with a balcony on top; at the front there are theatre chairs and red and white stacking chairs. The basic set, with minor changes, serves as the den of the black sorceress Ulrica, the graveyard where the gallows are and the house of Amelia in addition to a ballroom.

The costumes by Anja Rabes were modern, of course, but she showed an unusual attraction towards pajamas and housecoats. I have no idea why.

The set(s), the costumes, the general approach left one at sea as to what in the world was supposed to be going on. The singers, especially Pieczonka, and the Canadian Opera Company Orchestra under Stephen Lord gave us terrific entertainment but in the end there were some seriously flawed aspects.

No doubt the gentleman behind was simply trying to express his frustration at those unfortunate aspects of the production and he chose a less than usually civilized method of articulation.
____

A Masked Ball by Giuseppe Verdi opened on February 2 and will be performed eight times on various dates until February 22, 2014 at the Four Seasons Centre for the Performing Arts, 145 Queen Street West, Toronto, Ontario. Tel:  416-363-6671. www.coc.ca
Posted by James Karas at 11:49 AM