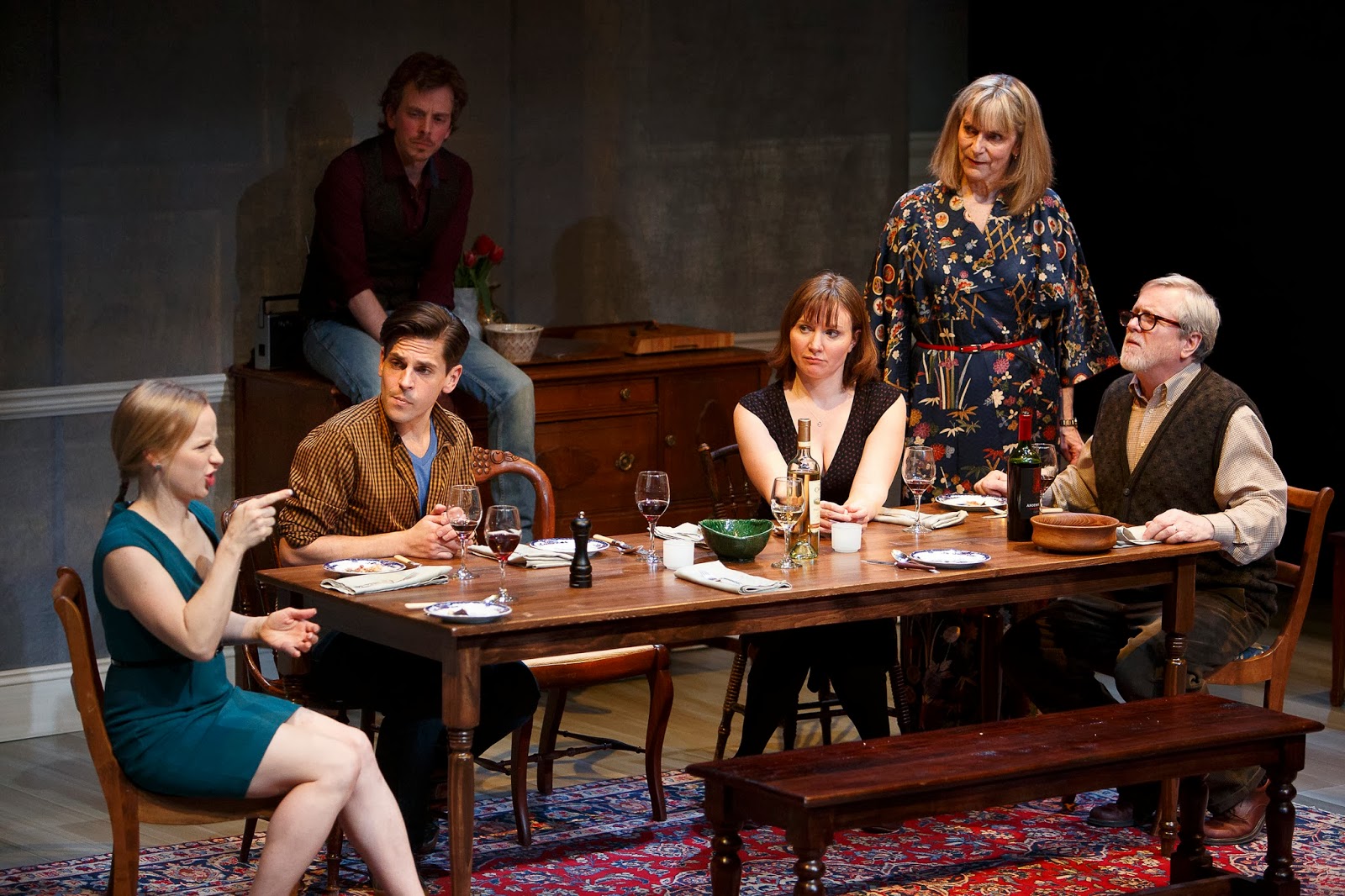 The Company in Tribes. Photo by David Hou

Tribes is a brilliant, thought-provoking and complex play that should not be missed. It was first produced in London in 2012 and is now receiving its Canadian premiere at the Berkeley Street Theatre.

Playwright Nina Raine has chosen a dysfunctional Jewish family in England for her examination of the lives of deaf people. Billy (Stephen Drabicki) was born deaf in a family of intelligent, eccentric and creative people. A great deal of the humour and cogent commentary is derived from the outrageous behavior of Billy’s parents and siblings.
The father, Christopher (Joseph Ziegler), is a retired professor who writes books of criticism. The mother (Nancy Palk) is trying to write a novel. Billy’s sister Ruth (Patricia Fagan) is trying to become an opera singer but lacks the talent for it. His brother Daniel (Dylan Trowbridge), smokes pot, hears voices and is trying to write a thesis. All of them are argumentative, rude, intelligent, funny and sarcastic.

But in the midst of the pleasant and unpleasant family dynamics, there is an elephant in the room. They are all pretending as if Billy is normal and no one notices that when he is not able to read their lips Billy is not part of the family. In fact, they have done everything possible to raise Billy as if he had no handicap.

Then Billy meets Sylvia (Holly Lewis), a young woman who is losing her hearing and who teaches him sign language, the powerful tool of expression for the deaf. This is not broken English, as Billy’s father wants to believe, but a fully developed method of communication. It is something that Billy’s family did not learn despite promises to the contrary, because they did not care enough, could not be bothered or they preferred the myth that Billy was simply normal.

Raine develops the characters with a sure hand and their lives become subplots to the play. Sylvia’s tortured descent into deafness, Daniels’s disturbed reaction to Billy’s leaving home and the parents’ need to come to terms with their well-intentioned but wrong-headed conduct add depth to this extraordinary play.

One’s compliments for Director Daryl Cloran and the overall success of the production cannot be as effusive. Cloran fails to achieve a cohesive and convincing performance of the play. The usual problem with accents is there. The play is set firmly in southern England (most likely London but I do not recall any specific reference to that city). There are a lot of jokes about northerners which did not strike a chord with the audience. Many good lines went AWOL because of simple carelessness on the part of the director and the overall rating of the production is second rank.

This does not take away from individual performances such as Drabicki’s who starts as an almost invisible member of the sometimes obnoxious family and finds immense inner strength to confront them.

Palk as the mother shows decency and love but she was also a big part of the problem in teaching Billy to talk without learning to sign herself. Ziegler is good as the foul-mouthed and supercritical intellectual but both of them kept sliding out of their accents.

Lorenzo Savoini’s set consisted mostly of a large dining room table with unmatching chairs and a few other pieces of furniture. It looks as if this family has barely made it into the middle class.

The play has a compelling theme and it was invigorating to hear intelligent dialogue and some fine acting. Too bad the production did not do full justice to the play.

Tribes by Nina Raine in a production by Theatrefront in association with Canadian Stage and Theatre Aquarius runs from February 2 to March 2, 2014 at the Berkeley Street Theatre, 26 Berkeley Street, Toronto, Ontario. www.canadianstage.com
Posted by James Karas at 10:53 AM