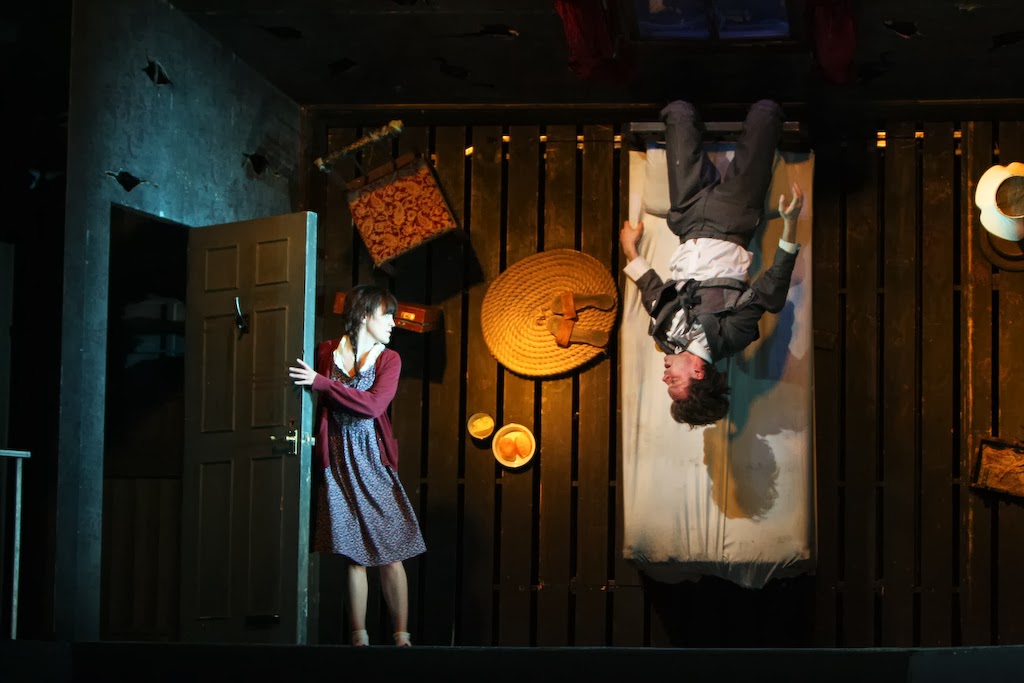 Franz Kafka’s Metamorphosis is a simple story about a salesman who wakes up and discovers that he has turned into an insect. Maybe a vermin or something. We are not sure. It combines the mundane and the fantastical in such a way that it has fascinated readers for almost one hundred years and spawned numerous adaptations as a film, stage play and opera. The question is what is this novella all about?

David Farr and Gisli Örn Gardarsson, a British playwright and director, and an Icelandic actor and director, have adapted Metamorphosis for the stage obviously not to tell us what it is about but to make us marvel at it as we scratch our heads and try to figure it out. The production is by the Vesturport theatre company of Iceland and it was first produced at the Lyric Hammersmith theatre in London in 2006.

On the simple level, the production is outstanding and memorable for its physicality and athleticism.  Björn Thors as Gregor the insect hangs from the ceiling and performs athletic feats as if he were preparing for the Olympics.

His bedroom furniture is at a right angle to the floor so that his bed is facing the audience as if it were a picture hanging on the wall. This is an extraordinary piece of stage design by Börkur Jónsson as it immediately takes the story out the ordinary milieu of the two-story house in Eastern Europe. We have the mundane and the fantastical combined graphically. Gregor’s acrobatics and the commonplace activities of the dining room on the main floor are another juxtaposition of the fantastical and the conventional.

The play develops as Gregor, his family and visitors try to come to terms with his metamorphosis. Commonplace activities such as Gregor eating something, on one hand, and the nefarious issue of the slow rejection of him by all are intermingled. Gregor, the supporter of the family becomes an “outsider.”

Complimenting Thors on his acrobatic prowess is the least one can do for so outstanding a performance. From the moment he discovers that he has been turned into something almost unrecognizable to his final destruction, we see his amazing transformation. Outsiders are common in drama and literature but Gregor and Thors’s performance are unique.

The rest of the cast acts almost like a chorus to Gregor’s metamorphosis as we watch them react, comment and try to come to terms with it. His sister Greta (Unnur Ösp Stefánsdóttir), his father (Tom Mannion), his mother (Edda Arnljótsdóttir) and Víkingur Kristajánsson as Herr Stiethl and Herr Fischer are again both naturalistic and fantastical in keeping with the approach by the adapters who are also the co-directors.

Nick Cave and Warren Ellis have composed some eerie music for the play that is very effective and manages to be played and heard without interfering with the action on stage.
Like many people coming out of the theatre, you may end up using words such as “weird,” “bizarre” and “different.” On further reflection, you will come to the more sober verdict of “this is extraordinary theatre.” So much for a simple story!