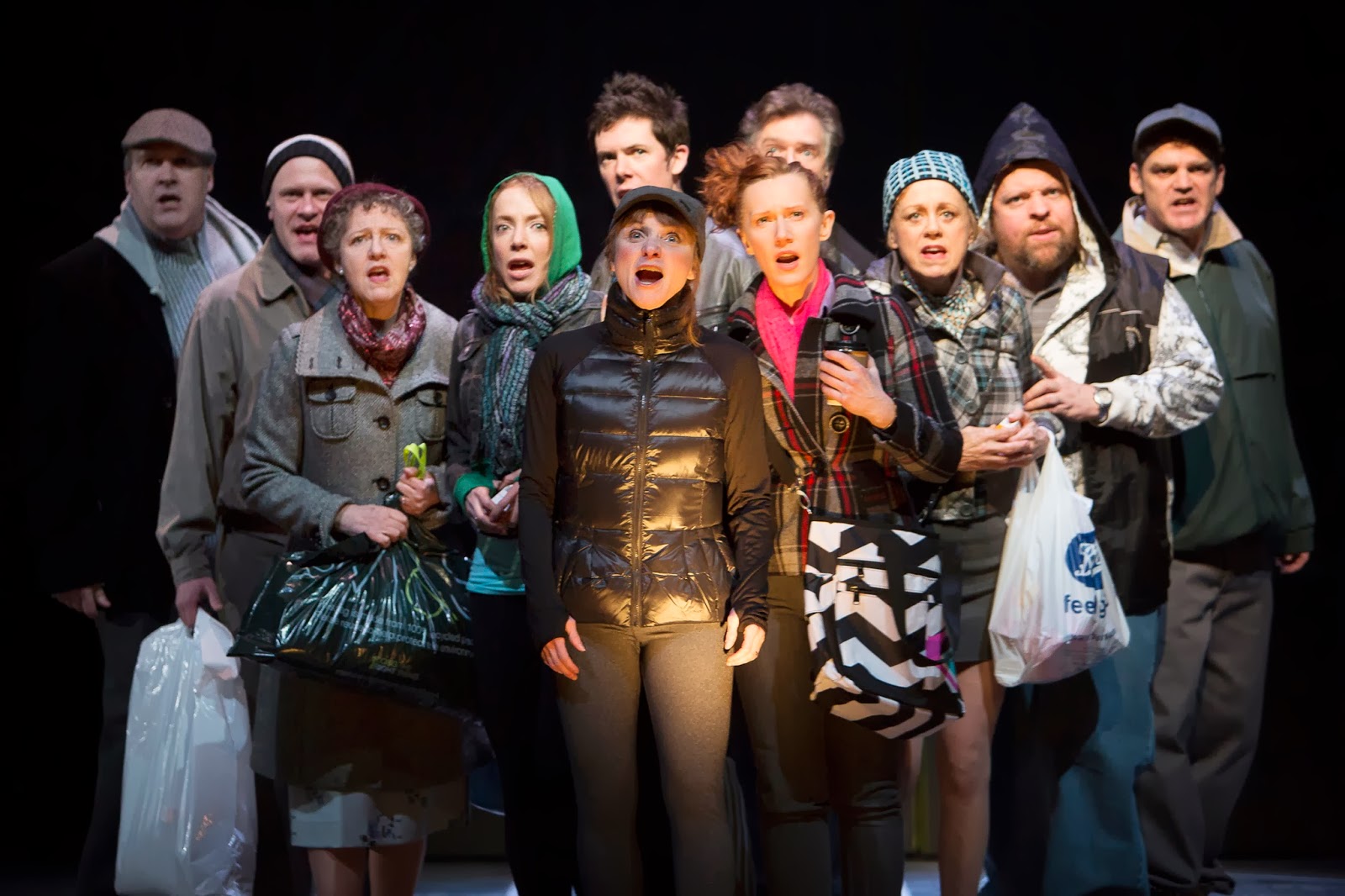 The Company in London Road. Photo by David Hou.
Reviewed by James Karas

Brutal crimes are a frequent source material for plays and films and what happened in the town of Ipswich, England, proved to be no exception. In 2006, five prostitutes were murdered and the life of the town, especially of London Road where the crimes were committed, was understandably affected.

There is plenty of Jack-the-Ripper type of material from bloody murders to arrest and trial but playwright Alecky Blythe chose a different route for the creation of the musical London Road now playing at the Bluma Appel Theatre. She conducted and recorded extensive interviews with the townspeople and constructed a script based on what they said. She used verbatim what more than fifty people said from the time of the murders to the end of the trial and conviction of the murderer. Composer Adam Cork added music to highlight some of the comments with no attempt at creating any traditional melodies.

Without the music and sometimes with the music, the play struck me as another form of reality TV or it bore frightful resemblance to, say, CNN reporting a bloody crime in Smalltown, U.S.A. The breathless reporters trying to capture the mood of the town, the frightened, shocked, bewildered citizens with almost formulaic reactions are all too familiar and hardly seem the stuff of a two-hour musical.

Canadian Stage believes that they are and it has assembled a first-rate cast under the direction of Jackie Maxwell for the North American premiere of the musical.

At the back of the stage we see the picture of an ordinary street. It has gray, depressing looking houses on each side and presents an atmosphere of bleakness. There is not a single car in view but the street looks quite wide. The press kept referring to the street as “the red light district” after the murders and the residents formed a neighbourhood watch committee to beautify their street. This is where the play opens.

We meet the townspeople played by Ben Carlson, Fiona Reid, Damien Atkins, Deborah Hay, George Masswohl and others. They will play the roles or repeat what the real people of Ipswich said to Blythe. They will sing some of the lines in a type of recitative that will not tax the vocal abilities of anyone.

The scene will change effortlessly from house to house, from street to courthouse as we hear what these people have to say about the victims, the murderer and the situation in town. Just because what we hear is authentic reactions by “real people” does not necessarily make it more interesting or interesting at all. The views, after a while, sound repetitive as does the music. Once you get past the “isn’t it interesting hearing what real people have to say” you realize that they don’t have all that much to say.

Verbatim or recorded theatre is much more interesting as a concept than as a reality in performance. Leave that type of reality to people who stay home in front of the television.

In fairness, I should mention that London Road won the Critics’ Circle Theatre Award as the best musical of 2011. Go see it and let me know what you think.
______

London Road by Alecky Blythe and Adam Cork opened on January 23 and will run until February 9, 2014 at the Bluma Appel Theatre, St. Lawrence Centre for the Arts, 27 Front Street East, Toronto, Ontario. www.canadianstage.com
Posted by James Karas at 11:18 PM