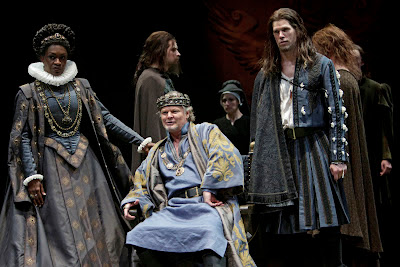 Yanna McIntosh as the Queen, Geraint Wyn Davies (centre) as Cymbeline and Mike Shara as Cloten with Brad Hodder and Naomi Wright (background) in Cymbeline. Photo by David Hou.
Reviewed by James Karas

No one would argue that Cymbeline is one of Shakespeare’s best plays. Even so, you would expect the Stratford Shakespeare Festival to produce it with some frequency but even they steer away from it. In its 61 years, the Festival has produced the play only four times, the last time being in 2004.

The reasons for avoiding the play are not hard to find. It has a large cast (not unusual for Shakespeare) and a bizarre plot that leaves you scratching your head at the best of times.

The current production at the Tom Patterson Theatre, directed by Antoni Cimolino, is solid, well-done, traditional (you could say almost unimaginative) staging that is helped by some fine acting, especially by the women.

Cara Ricketts as Innogen (she is usually known as Imogen but some editors prefer Innogen), is an attractive, intelligent and resourceful woman. She has to cross-dress as a man and find herself lying beside a headless torso which she mistakes for her husband’s. A performance worthy of the character by Ricketts.

Yanna McIntosh plays the conniving and evil Queen. She is Innogen’s stepmother and wants her to marry her oaf of son Cloten. She plots to get rid of Innogen and peace is only restored when she dies near the end of the play. McIntosh handles the role with relish and great ability.

King Cymbeline is played by Geraint Wyn Davies. The King is a decent man and supposedly under the thumb of the Queen, his second wife. Davies appeared sufficiently royal as he had to maneuver between being a leader in control and a husband who is blind-sided by his wife.

Graham Abbey is Posthumus, the “hero” of the play. He is not of royal blood but Innogen loves him and they are married. He is exiled to Rome where he shows more brawn than brain when he wagers with Iachino, a sleazy Italian, that Innogen is irreproachable. Well, Iachino goes to her bedroom hidden in a trunk, approaches as she sleeps and notices a mole under her breast. Needless to say, Posthumus believes that his wife was unfaithful and denounces her. Fine performances by Abbey and Tom McCamus as Iachino.

Mike Shara is perfect as the lumbering, arrogant, stupid and oafish Cloten, the Queen’s son from a previous marriage. He is intended for Innogen and the throne of England but luckily for both his head is chopped off.

The rest of the cast provide good performances that deliver the text without necessarily improving the play.

Cimolino does give us a battle scene with the Romans marching in formation and being met by the British is a loud fight. It’s a bit of a relief amid the plot’s twists and turns.

The play is done on a completely bare stage. Even the cave where Belarius (John Vickery) and his two “sons” who look like left-over Neanderthals but are better spoken live is just a fold in the curtains. Belarius abducted the King’s children, Guiderius (E.B. Smith) and Arviragus (Ian Lake) and raised them in a cave.

A four-poster bed is wheeled on and off the stage in the opening scene and later in the play. I am not sure why unless it is a reminder of the importance of the bedroom scene in which Innogen is unjustly compromised.

The Romans wear the plummeted helmets, breastplates and greaves of Hollywood movie variety while the Queen wears a long black gown with ruffles suggesting the Elizabethan era. The play is set at the time when Christ was born and the costumes clearly suggest that in some instances they are about sixteen hundred years apart.

Cymbeline is a tough play to like and even tougher to stage with a coherent, imaginative and comprehensible vision. Potions, apparitions and the appearance of Jupiter do not help. Cimolino gives us a comprehensible and intelligent production that does him and the Festival great credit.

Cymbeline by William Shakespeare opened on May 31 and will run in repertory until September 30, 2012 at the Tom Patterson Theatre, Stratford, Ontario. www.stratfordfestival.ca