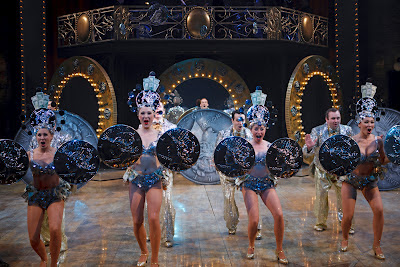 Members of the company in 42nd Street. Photo by David Hou.


When David Merrick produced 42nd Street on Broadway in 1980, he called it a “Song and Dance Extravaganza”. There is truth in that statement and many other epithets were attached to the huge hit that ran for nine years and 3,486 performances. Gower Champion, its legendary director and choreographer, died on the day the show opened!

42nd Street is this year’s big musical offering from the Stratford Shakespeare Festival. If the usually unreliable opening night audience is any indicator, it should be a big hit and pay the bills.

The plot of 42nd Street is based on a pleasant myth that may be called almost a cliché. An innocent young woman, dressed in a white dress, white hat and white gloves, arrives in New York in the 1930’s and wants to sing and dance on Broadway. The wholesome Peggy Sawyer (Jennifer Rider-Shaw) is from Allentown, Pennsylvania, presumably the bastion of American virtue and innocence.

Julian Marsh (Sean Arbuckle), a rough-and-ready producer, is putting on a show on Broadway and he is auditioning hopefuls. The star of the show will be the Dorothy Brock (Cynthia Dale) who comes accompanied by her sugar daddy Abner Dillon (Steve Ross), her lover Pat Denning (C. David Johnson) and her hauteur.

Well, Dorothy will break her leg and the show will close. No, she will be replaced by … no peaking at the programme, now … and guess what the result will be? Now you realize why Merrick called the show a Song and Dance Extravaganza.

The show does provide a lot of fabulous tap-dancing, shapely “dames”, in a variety of plumage and handsome men in top hats and tails. They all generate energy, rhythm, toe-tapping excitement and sheer entertainment.

The songs are familiar and memorable. From the title tune “Forty Second Street” to “Lullaby of Broadway” to “We’re in the Money” these are beautiful melodies that follow you out of the theatre and remain imbedded in your subconscious.

The credit for much of that goes to Harry Warren for the music and Al Dubin for the Lyrics. Director Gary Griffin does a great job with the dancing and the creation of energy (there are lots of entrances and exits) but he is not as lucky in the singing department.

The star of the show and the show-within-the show is Cynthia Dale. Unfortunately her singing ability does not quite match the hype that precedes her appearance. Her voice can be described as adequate but one ventures to submit that it is not enough for a major production by a major institution like the Stratford Shakespeare Festival.

If the rest of the singers had first-rate voices that soared above Dale’s, we may be more charitable towards her and them but the fact is that no one hits the stratosphere. Kyle Blair as Billy Lawlor does a decent job and Jennifer Rider-Shaw, the new star, does not quite soar to the heights that would make the moniker entirely applicable but she is close enough.

Sean Arbuckle is convincing as the tough if not too bright director of the show but he is a director and not a singer for good reason. He is very good in mid-range but he is well-advised and usually does not stray into notes beyond his ambit.

I am always ambivalent about big Broadway productions in Stratford. The job of management is surely to produce works of quality that fill the theatre. Can that not be done without light stuff like 42nd Street? Does a song and dance extravaganza fit in with Shakespeare and Company?

Opening night audiences are about as reliable as Helen of Troy. The seats are filled with fellow actors and donors who are all well-disposed towards the performers and the production. Frequently they display knee-jerk enthusiasm for which there is sacnt justification. No matter how pedestrian the play or the performance, a standing ovation at the end is de rigueur. But in the case of 42nd Street, the enthusiasm of the audience went beyond cheering their friends. They simply loved the show.

Perhaps that is a good barometer for choosing a production
______

42nd Street by Harry Warren (music), Al Dubin (lyrics) and Michael Stewart and Mark Bramble (book) opened on May 29 and will run in repertory until October 28, 2012 at the Festival Theatre, Stratford, Ontario. www.stratfordfestival.ca
Posted by James Karas at 1:44 PM