THE MATCHMAKER IN WILD AND FARCICAL TREATMENT AT STRATFORD SHAKESPEARE FESTIVAL 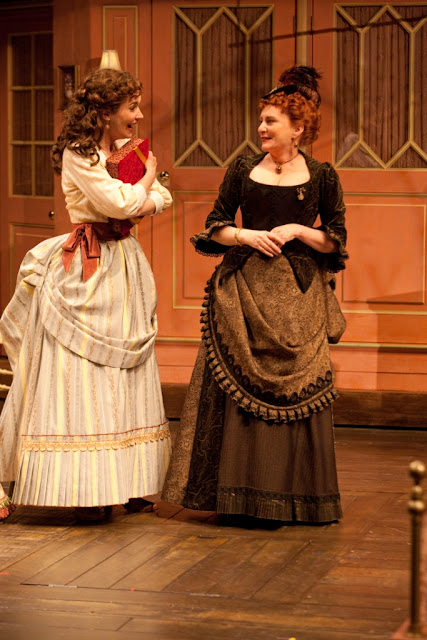 Laura Condlln as Irene Molloy and Seana McKenna as Dolly Levi in The Matchmaker. Photo by Cylla von Tiedemann.
Reviewed by James Karas

Thornton Wilder called his 1954 play The Matchmaker a farce and indeed it has many farcical elements. But it is also a play with characterization, plot development and wisdom that raise it above the usual door-slamming, pants-down farces.

Chris Abraham who directs the play at the Stratford Shakespeare Festival this season has taken Wilder at his word and produced a fast-moving, wildly farcical view of the play that went over extremely well with the audience.

The Matchmaker was made into the musical Hello, Dolly! and most people know that version better than the play. A vote of thanks to Stratford for giving us the play.

Horace Vandergelder is a wealthy merchant in Yonkers, New York in the 1880s and at age 60 he has decided to re-marry. He is bombastic, opinionated, untrusting and thinks that the world is peopled with fools. In short, he is hilarious. Give the role to Tom McCamus, with white hair and a beard, and you have an actor who can bring in the character and the laughs.

Marriages, of which there are several in the play, require the services of a matchmaker, of course, and Yonkers at that time was well-served by Dolly Gallagher Levi, herself a widow and the best friend of Vandergelder’s late wife. Her talent is to convince people that they want what she wants them to want. She must be intelligent, circumspect, cajoling and conniving, and, one need hardly say it, amusing. Seana McKenna, with her distinctive voice, brings all those characteristics in Dolly and dominates the performance whenever she is on stage.

Vandergelder’s hands are full. He has two idiotic clerks in Cornelius (Mike Shara) and Barnaby (done well by Josh Epstein) who set out for Manhattan in search of adventure culminating in the ultimate experience of kissing a woman. Shara has that bumbling, naïve look that is perfect for the role. The two clerks provide much of the slapstick humour as the innocents abroad.

He also has his pretty niece Ermengarde (nicely done by Cara Ricketts) who is in love with and insisting on marrying the unacceptable artist (yikes!) Ambrose (Skye Brandon).

The Yonkers crowd including the strange-accented and job-changing Malachi (wildly played by Geraint Wyn Davies) descend on New York. The two clerks find themselves in Irene Molloy’s hat shop where they have no business being as does Vandergelder. Irene (Laura Condlin) is a candidate for Vandergelder’s wife and massive confusion and classic farce scenes (hiding under a table or in a closet) ensue.

There is a snooty Headwaiter (John Vickery), an over-effusive spinster played by Nora McLellan (a major talent not used frequently enough) and an assortment of characters that fill the stage and provide energy and slapstick humour.

The cast had the audience in the palms of their hands and the evening and the production moved briskly. It may be churlish to complain, but I will anyway. Abraham’s choice of a farcical and slapstick approach is defensible but is there such thing as overdoing it? Some of the jokes struck me as being over-influenced by cheap sitcom gags that we could have done without. Stage farce can do without some of the excesses of second or third rate television programmes. The Matchmaker is a fine play that does not need every gag that a director can think of.

When all is said, The Matchmaker was an excellent end to the first of week of opening nights at Stratford.
______

The Matchmaker by Thornton Wilder opened on June 2 and will play in repertory until October 27, 2012 at the Festival Theatre, Stratford, Ontario. www.stratfordshakespearefestival.com 1 800 567-1600