THE PIRATES OF PENZANCE IN EXUBERANT PRODUCTION AT STRATFORD SHAKESPEARE FESTIVAL 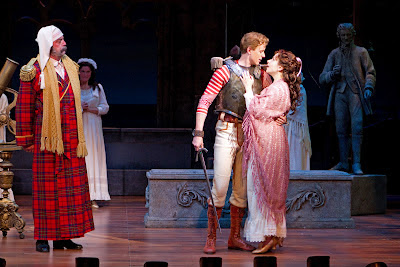 From left: C. David Johnson as Major General Stanley, Kyle Blair as Frederic and Amy Wallis as Mabel Stanley in The Pirates of Penzance.

W. S. Gilbert and Arthur Sullivan made life very easy for producers who wanted to put on operettas. The wrote a number of sure-fire hits that provided fantastic tunes, very funny and silly plots, and the possibility of creating a high-spirited, indeed exuberant, production. The Stratford Shakespeare Festival has taken its cue and produced just that type of show in its staging of The Pirates of Penzance at the Avon Theatre.

In case you have forgotten the basis of the plot, here is a sharp reminder. Ruth, a nursemaid, was sent to enroll Frederic as an apprentice pilot. She misunderstood and enrolled him as an apprentice pirate. Those things will happen and that is how Frederic ended up being indentured to The Pirates of Penzance where he was duty-bound (remember the subtitle of the operetta is The Slave of Duty) to stay until his 21st birthday. (By the way Penzance is in Cornwall, England, not some Caribbean island).

But Frederic was born on February 29 and when he was chronologically 21 he had celebrated only 5 birthdays. I trust that is clear.

The success of the production rests largely with director Ethan McSweeny. From the opening bars to the final scene, this is an imaginative, funny, well-sung, exuberant production that provides a thrilling night at the theatre. McSweeny is clever, inventive and simply brilliant.

I do not want to short-change Choreographer Marcos Santana or Set Designer Anna Louizos who provide so much of the energy of the show and the scenic splendor respectively.

The key performers do excellent work even though there are some vocal limitations. Frederic must be young, naïve, handsome and sing his heart out. Kyle Blair qualifies on all counts although his voice tends to become a bit strained in the high notes.

Mabel (Amy Wallis), the lady that Frederic falls in love with, is pert, pretty, petite and can sing up a storm. Wallis manages her high notes and trills with perfect pitch and she is a delight to watch.

Thomas is in the hands of the Sean Arbuckle who does an excellent job as the would-be tough Pirate King. He is well-served by his lieutenant Samuel (Jordan Till) who is quite funny.

Major-General Stanley is perhaps the most famous character of The Pirates because he gets to sing “I am the very model of a Modern Major-General”. C. David Johnson is very good in the role except that he does not quite succeed in enunciating all the words of the song or maintaining the speed of the patter.

Steve Ross is superb as the Sergeant of the Police, a Keystone Kops type of force that wears Union Jack underwear.

For ensemble dancing and singing, we have three groups: the pirates, the wards of the Major-General and the police and they provide much of the energetic movement of the production.

The Pirates is, as I said, set on the coast of Cornwall but the attempts at English accents range from the inept to the more inept.

In the end, the complaints are minor compared to the overall conception, design and execution of the production. It may well prove one of the best of the season.
______

The Pirates of Penzance by W. S. Gilbert and Arthur Sullivan opened on June 1 and will run in repertory until October 27, 2012 at the Avon Theatre, Stratford, Ontario. www.stratfordfestival.ca