YOU’RE A GOOD MAN, CHARLIE BROWN BUT THE MUSICAL BASED ON YOU IS NOT MUCH TO SING ABOUT 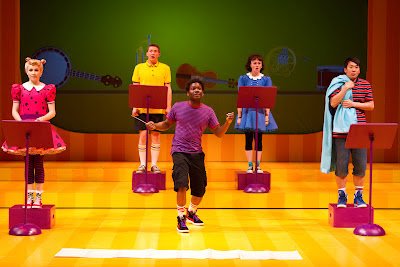 What possessed the Stratford Shakespeare Festival to choose You’re A Good Man, Charlie Brown for production this year?

First let me give you some information so helpfully provided by Professor James Magruder in the programme. Charles Schulz’s comic strip Peanuts has spawned a billion-dollar a year industry. At one time it was supposed to have been read by 5% of the literate population of the globe!

A musical called You’re a Good Man, Charlie Brown was created in 1967 and by the 1980s “there had been 40,000 productions of the show, making it the most produced musical in the history of the American theatre” according to Professor Magruder.

Did it prove impossible for Stratford to argue against stats like that and hence the production?

The musical has the six Peanuts characters perform musical sketches, some no more than vignettes, based on familiar incidents of their “life.” Charlie (Ken James Stewart) is involved in several musical numbers and of course relates his woes with the little girl in the red hair, his attempts at playing baseball and trying to connect with people.

Linus (Kevin Yee) sings about “My Blanket and me,” Schroeder (Andrew Broderick) sings “Beethoven Day,” Snoopy (Stephen Patterson) has several numbers and is the amusing dog that pretends to be The Red Baron or just wants to be fed and sleep on top of his doghouse.

Sally (Amy Wallis) is mostly an ensemble player but she does tell us about “My New Philosophy” with Schroeder. The bossy Lucy of Erica Peck does an amusing poll about her character.

Before dumping on the whole, I should note that these youngster performed very well. They displayed confidence, talent and sheer energy that should stand them in good stead on stage and screen.

Some of the sketches, taken individually, were relatively amusing. Like picking up the paper and reading a cartoon strip and smiling at the punch line, you might say.

But in this case, we were not reading the newspaper or glancing at a cartoon strip. We had to sit through a couple of hours of noisy singing and cartoonish antics. The theatre had a lot of children and I am not sure if the show is intended for kids. Some of the material will no doubt be over the head of children but the show is colourful enough with some projections of video games to keep the little tykes awake and enjoying the show.

There was some adult humour about the ironies of life, the pain of rejection, the fear of approaching a young girl and the heartaches and the thousand natural shocks that Charlie Brown and the rest of us are heirs to.

All of that is not enough to save the show from being a noisy bore that makes two hours appear like an eternity.

Director and Choreographer Donna Feore delivers what she was given but an efficient and talented driver who comes to your door on time with a lousy pizza gets little credit for his speed and careful driving.

A bad night at the theatre and a question: why did the Festival choose this musical?

You’re a Good Man, Charlie Brown, based on the comic strip “Peanuts” by Charles Schulz with book, music and lyrics by Clark Gesner with additional dialogue by Michael Mayer and additional music and lyrics by Andrew Lippa, opened on May 30 and will continue in repertory until October 28, 2012 at the Avon Theatre, Stratford, Ontario. www.stratfordfestival.ca