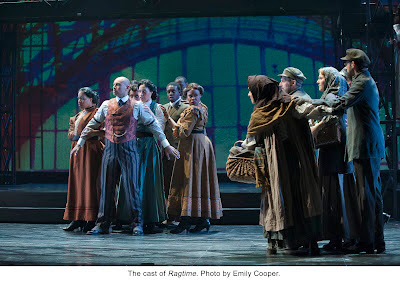 Ragtime is a big, ambitious and intelligent musical that premiered in Toronto in 1996 and is this’s year’s “big musical” offering from the Shaw Festival. The production deserves the epithets applied to the work that is based on E. L. Doctorow’s novel of the same name.

The musical wants to do nothing less than present a large if not comprehensive view of America at the beginning of the 20th century. An amalgam of fact and myth, real people and fictional characters are used to give a gritty, realistic and glorious depiction of Americana.

The inter-connected plot starts with the well-off and closed-off society of New Rochelle, New York. The Father (Benedict Campbell) has all the prejudices and bigotry of most white Americans of the era whereas his wife (Patty Jameson) is far more tolerant and humane. They are rich and life is good.

The other end of the social spectrum is represented by the blacks of Harlem and more specifically by Coalhouse Walker (Thom Allison) and Booker T. Washington (Aadin Church). Walker is a rebel and demands civil rights by violent means as opposed to Washington’s non-violent approach.

The third social segment is that of the immigrants, represented by Tateh (Jay Turvey), a fresh-off-the-boat Jew. We also have Henry Ford (Peter Millard) and J.P. Morgan (Anthony Malarky) to represent the nascent industrial and financial America that would come to dominate the world.

For good measure we also have the magician Houdini (Kelly Wong) and the fiery labour activist Emma Goldman (Kate Hennig) who reminds us of the horrible working conditions of the lower classes.

That is indeed a large canvas and one that would appear quite unsuitable for musical treatment where a light touch and entertaining approach would seem to be essential.

Composer Stephen Flaherty and lyricist Lynn Ahrens have found a medium for the words and music to match the subject matter of the work. The syncopated rhythms of ragtime music allow for powerful expressions as well as lyrical songs and ensemble pieces. The music and songs are eminently approachable and very effective.

Thom Allison gives an impressive performance as the Negro who is pushed into rebellion and in the end violence against the injustices meted upon him. Allison has a powerful voice and sang and performed with conviction.

Jay Turvey’s Tateh starts as a dreamy and hopeful immigrant only to be struck down by the reality of life in an American sweatshop. But he is lucky and gets out of his milieu quite triumphantly. He becomes a movie mogul and the apotheosis of the American dream. Superb work by Turvey.

Campbell is the bigot Father who eventually comes around. He has to sing a couple of songs and as long as he does not stray too far from his allotted octave, he is fine. Jameson as his wife has a better voice and plays a more sympathetic part.

The set by Sue LePage is heavy on steel girders and insistent on the impression of a nation that represents industrial power. There is even a Model T Ford, surely one of the grand symbols of American ingenuity, productivity and wealth.

Ragtime by Terence McNally (book), Stephen Flaherty (music) and Lynn Ahrens (lyrics) opened on May 26 and will continue in repertory until October 14, 2012 at the Festival Theatre, Niagara-on-the-Lake, Ontario. www.shawfest.com.