MISALLIANCE AT SHAW FESTIVAL – GUNS BLAZING BUT WHERE IS THE TARGET 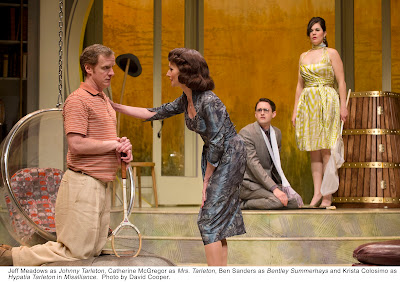 At the end of Bernard Shaw’s Misalliance, one of the characters says “I suppose there’s nothing more to be said.” The reply, spoken fervently, is “Thank goodness.”

The last words are no doubt meant to be taken ironically and not as an expression of relief that the play is finally over. The audience in the largely empty Royal George Theatre where Misalliance is now playing seemed to be more relieved than impressed with the production and the play.

The Shaw Festival offers 11 plays on 4 stages for its 51st season but only two of them are by Shaw. I don’t think that it is so much disloyalty to the playwright as a realization that many of his plays will not fill the theatre. Still, 2 out of 11 leaves the Festival that bears the Irish playwright’s name paying little more than lip service to him.

What do you get from this production of Misalliance? Shaw wrote the play in 1909 and 1910 and called it “A debate in one sitting.” The problem is figuring out what the characters are debating. Love, marriage, family, social position, socialism, they all come into play with some wit, much erudition but very little focus.

We have John Tarleton (Thom Marriott), the wealthy owner of Tarleton Underwear who has a wife and two children, Hypatia (Krista Colosimo) and Johnny (Jeff Meadows). John Tarleton is a self-made man from the lower classes and Marriott attempts a working-class English accent which he does very badly and speaks so quickly that he muffles some words. After that, you could take him for a gruff but not stupid businessman.

Meadows’ s Johnny is somewhat hyperactive and in fact he could be a psychopath. I am not sure if that is what Shaw intended.

Hypatia is a central character of the play. She is an intelligent woman who is not allowed to do much except perhaps find a husband. The current candidate is Bentley Summerhays (Ben Sanders), who is a simply pathetic character, a sniveling wimp, and she will shortly give him up for the manlier Joey Percival (Wade Bogert-O’Brien).

The Tarletons are in the country home on a weekend in 1962. Hypatia is dressed in a sleeveless dress that is so ugly and unbecoming, I wondered if there is some joke that I did not get. Wealth with no taste perhaps but it does not quite work. Mrs. Tarleton in the hands of Catherine McGregor seems like a sensible woman, nicely dressed as if going to some function. I am not sure what Designer Judith Bowden was up to.

Peter Krantz as Lord Summerhays represents the conservative, upper class and even with a not-completely satisfactory English accent he is good.

The plot gets a boost, if that is the right word, when Lina Szczepanowska (Tara Rosling) and Joey Percival drop in from the sky, literally, as their plane lands on the roof of the Tarleton house. Being unable to pronounce those “foreign names” used to be a lot funnier at one time and foreigners themselves were far more colourful. Rosling speaks with an atrocious accent and her Lina is a non-starter.

Director Eda Holmes has moved the play from 1910 to 1962 for no good reason that I could detect. The social milieu, talk of empire and the state of marriage are 1910 vintage when there was an empire. Placing everything in 1962 makes no sense at all.

Misalliance can be done in a way so that the humour produces some genuine laughter and the arguments appear more interesting if not scintillating. Eda Holmes’ approach, unfortunately, did not work particularly well.
_____

Misalliance by Bernard Shaw will run in repertory until October 27, 2012 at the Royal George Theatre, Niagara-on-the-Lake, Ontario. www.shawfest.com.