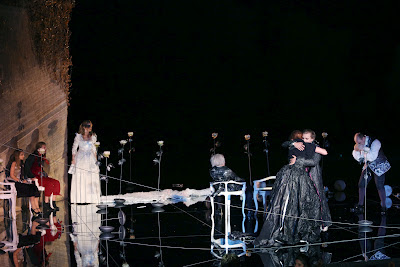 La Finta Giardiniera is one of Mozart’s less known operas but the Aix-en-Provence Festival gives it a solid production outdoors at the Domaine du Grand Saint-Jean. It was Mozart’s seventh opera when he composed it at the ripe old age of 18. Musically it is Mozartean splendor but the plot is so tortuous as to be torturous. Most opera houses give La Finta a wide berth and even the Aix-en-Provence Festival is mounting it only for the second time in its 64 years of existence.

The production is directed by Vincent Boussard who also designed the costumes. He takes a light approach as becomes an opera buffa but inevitably suffers some setbacks because of Giuseppe Petrosellini’s libretto with its inanities, complications and simple length. But he has Mozart’s music on his side: superb arias and ensemble pieces that make the whole thing worthwhile.

The Marquise Violante Onasti is almost murdered by her fiancé, runs away disguised as a gardener named Sandrina. Just ignore the green dress that soprano Layla Claire in the role is wearing and listen to her lovely voice, full of expression and wonderful coloration. She will be given a better dress later on but her singing will be superb throughout.

Count Belfiore, her fiancé and would be-murderer, is sung by tenor Julian Prégardien, who dashes around the stage quite a bit. He is eventually redeemed from his moral and legal faux pas and manages to do a good singing job in the meantime.

Soprano Ana Maria Labin sings the snooty Arminda. She is beautifully gowned and gets some marvelous arias, including “Si promette facilmente” and “Vorrei punirti, indegno” where she very dramatically threatens her lover with cardiovascular surgery.

Don Ramiro is sung by mezzo-soprano Julie Robard-Gendre. This is a pants role that was originally sung by a castrato. It demands some vocal flourishes and trills that may come more easily to a countertenor. La Finta does demand a few such flourishes that some of singers attempted without much success. Robard-Gendre did have to wear a ridiculous wig but the costume was not as bad as some of the others.

Soprano Sabine Devieilhe sang the role of the servant Serpetta. She was outfitted with a white apron over a dress and I am not sure what century she was in. That goes generally for the costumes which suggested 18th century beginnings with unknown destinations. Devieilhe was good of voice and quick of foot as most servants must be in opera.

Tenor Colin Balzer played the Mayor for all the comedy that could be eked out of the role. Baritone John Chest was Nardo, the other servant, who is played for laughs and he was quite adept at his role.

La Finta in addition to having a complex and awful plot is very, very long. The performance that started at 8:30 lasted until almost midnight with one intermission. Even with some cuts, this was very long and by the end, the performance had started losing steam. Boussard and Conductor Andreas Spering would have been well advised to excise some more parts.

The venue is a small, makeshift theatre behind a chateau. To the left you see the back wall of the chateau while to the right fields of grass and trees stretch as far as the eye can see. The stage is a bare triangle and a few chairs, some lights and a curtain are about all the props that are required.

The surtitles are projected on the chateau wall but they are not visible until darkness falls, which is about an hour after the performance begins. For a while the cicadas compete with the orchestra but even they settle down to listen to Mozart’s music as performed by Le Cercle de l’Harmonie Orchestra under the capable baton of Andreas Spering.

In the end, grumble as one may, you still get a wonderful night at the opera under the gorgeous sky of Provence.
______

La Finta Giardiniera by W. A. Mozart opened on July 8 and will be performed on various dates until July 26, 2012 at the Domaine du Grand Saint-Jean, Aix-en-Provence, France. http://festival-aix.com/