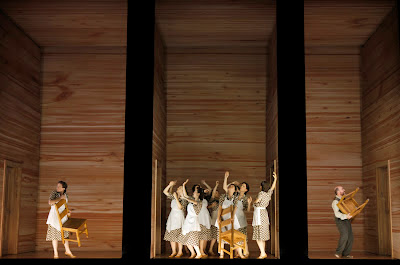 David is best known as the slayer of Goliath and the subject of a statue by Michelangelo that defines male beauty and virility. Less well known is his relationship with Jonathan, the son of King Saul, which was deep and perhaps homosexual. It is that subject the Marc-Antoine Charpentier took for his subject for David et Jonathas, his opera that premiered in 1688 and is offered by the Aix-en-Provence Festival this year.

In the Prologue, a distraught King Saul visits a Witch and a batch of demons. I suppose Witches and Demons can live anywhere and take whatever shape they want, but in the current production at the Aix-en-Provence Festival, we meet them in a paneled room. The Witch is sitting on a wooden chair and is wearing an ordinary dress with a white apron. She could be a housewife or a bakery worker. The Demons look like photocopies of the Witch. We are definitely not in ancient Israel or 17th century France.

David et Jonathas was composed for the students of a Jesuit school. After some initial successes it was ignored until recently. Thanks largely to Christie, it is seeing a well-deserved revival.

Director Andreas Homoki and conductor William Christie have transposed the Prologue to the end of Act III but it is a good example of their approach to the opera.

Unfortunately, Homoki and Christie give us more of a recreation than a revival. For familiar works, one wants, indeed, demands, that the director bring a vision and interpretation that is original, personal, even startling. With a relatively unknown work, I would have preferred a more traditional approach rather than something that is modern and appears quite ill-suited to the opera. Good wine may taste the same in new bottles but the leaving it in its original container may be more appropriate.

The set designed by Paul Zoller consists of a paneled box that can be sub-divided into several boxes. The paneling is of light wood. A few chairs and tables of the same material are about all the props that are used. In other words, the biblical story takes place nowhere.

The costumes are modern with some indications of Middle Eastern garb of indeterminate chronology. King Saul wears a vest and a shirt and he looks like a shop owner in New York, Toronto or Jerusalem. The rest of the characters and chorus range from the look of escapees from a Siberian prison, women from the street of some Muslim city and ordinary workers from the 1950’s when men still wore Fedora hats.

If there is an overall vision related to the set and costumes, it escaped me totally.

Charpentier and his librettist wanted to tell the story of the friendship of David and Jonathan and the struggles between the Israelis and the Philistines. We can be certain that Père François de Paule Bretonneau, the Jesuit who wrote the libretto and Charpentier did not wish to show a homosexual relationship. In this production the two men embrace and kiss and are openly gay. That may be a legitimate interpretation of the opera but it has nothing to do with what was put down in 1688.

There are numerous scenes of domestic life, much of it showing doubles for David and Jonathan as children happily running around during brief orchestral interludes. I am not sure where this comes from or where it is going. I found it annoying and confusing

The opera does contain some beautiful music and splendid vocal pieces but this production’s lack of fidelity to the original style and the uneasy transposition to a modern milieu leaves one in the middle of nowhere. It is not done in a kind of baroque style and it is not a modern opera to fit the style chosen by Homoki.

Pascal Charbonneau as David has a fine tenor voice but the role should be sung in Baroque style with flourishes and colorations suitable to the period. The same applies to soprano Ana Quintans as Jonathan. King Saul is sung by bass-baritone Neal Davies and he looks like a shopkeeper who is having a bad day or many bad days.

The singers deserve kudos for their performances as construed by Homoki and Christie, badly conceived as the production may be. Achis is sung Frédéric Caton, Joabel by Kresimir Spicer and the Witch by Dominique Visse.

The final result is a confusing and misconceived production that serves no one well.
____