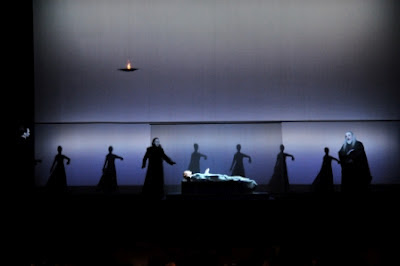 
Claude Debussy’s only opera, Pelléas et Mélisande, calls for a spring in a forest, scenes in a palace, a well in a park and a scene in the vaults of the palace. The composer did tell us that it is “ A Lyric Drama in five acts and twelve scenes” so there should be no surprise about the venue changes. From its premiere in 1902, it has been a difficult work to stage and appreciate. Its complex symbolism, impressionistic music and lack of any memorable melodies were not a good recipe for a runaway hit. One hundred and ten years later, it has established itself solidly in the repertoire and the current production at Barcelona’s marvelous Gran Teatre del Liceu combines a marvelous opera with a stunning production by Robert Wilson.

My full review may be read here:

http://www.bachtrack.com/review-barcelona-liceu-robert-wilson-pelleas
Posted by James Karas at 10:24 AM