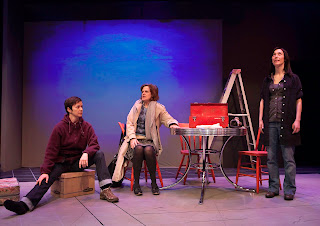 More Fine Girls is a 90-minute play that allows three actors a marvelous range for displaying their talents. The play has five authors: Jennifer Brewin, Leah Cherniak, Ann-Marie MacDonald, Alisa Palmer and Martha Ross. Three of the authors – Cherniak, MacDonald and Ross - were to star in the production but Cherniak was replaced by Severn Thompson. One of them, Alisa Palmer, directs it. If there are other plays that were written by a committee of five people, I am not aware of them.

The Fine Girls are three sisters but do not look for Chekhov’s bored and longing Russians nor Wendy Wasserstein’s witty Sisters Rosensweig. The Fine sisters in common parlance can best be described as wacko or nuts and they do provide some fun.

Jayne (Ann-Marie MacDonald) is a lesbian living on a farm where she is raising dogs with her partner. At the opening of the play she is visiting her parents’ gravesite with her sister Jojo (Martha Ross). They have not seen each other for several years (they are not sure exactly) but the three sisters are finally getting together in the family home. Well, you know that secret revelations or skeletons in the closets are in order.

The third sister, Jelly (Severn Thompson) is an artist with a 13-year old daughter who plays an important role in the play even though we never see her. All Jelly knows about her daughter’s father is that he was a cyclist in a park. She is not sure about who her biological father is either so we get an intergenerational connection to unorthodox conduct in this brilliant family. The father was a professor of English and a figure to be reckoned with.

Professor Jojo teaches Brecht but hates his work. She skipped her last lecture and she refuses to answer her phone when the dean is calling. Like her two sisters, she acts and overacts as a distraught woman on the edge but how did she ever become a professor and get tenure?

Jelly, the artist and the mother, communicates with extra-terrestrial beings and goes to the park looking for a middle-aged cyclist. She too is permitted histrionic acting.

The play delves into family history as the sisters’ deal with the present but aside from bizarre behavior one does not get very far with anything. Having set a time limit of 90 minutes, the five authors seem to have no idea what to do when the final minute arrives and just wrap it up and go home.

That is a lot of talent for relatively little. We know that the three stars can act and overact but the script is, in the end, pretty thin. Three wacky sisters are not enough to give substance to the play even for 90 minutes. An example of trying to save a bad script occurs when Palmer allows Jojo to rummage through her purse to find her vibrating mobile long after the joke has ceased being amusing.

Five writers are not better than one and in this case the result is just a waste of writing and acting talent.