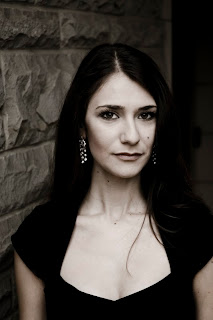 Eugenia Dermentzis has been ready to take the plunge for a long time. No, she is not a swimmer or a diver but a mezzo-soprano who has been preparing for the metaphoric immersion into performing for well over a decade. That is a long time for a woman who is only in her mid-twenties. Now, the pretty, slender singer with the body (and ambition) of a dancer is ready.

Not that she has ever been off the stage, it seems. The desire, or is it a permanent viral infection to belt out songs, started in grade school, she told me recently over breakfast. By grade eight, the illness had become serious enough for her to start taking singing lessons – and piano lessons, and dance lessons.

By grade 11, the Markham, Ontario (outside of Toronto) native had refined her ambitions and what was an apparent desire in childhood became a necessity in youth – she had to become a performer; she needed to be on stage.

Eugenia’s roots lie in the north-western corner of Greece and the musical background of her family can be fairly summed up at zero. In classic form, her paternal grandfather emigrated from Skopia, Florina in the 1950’s and opened a restaurant. He later went into the restaurant supply business and Eugenia’s parents are still running that enterprise.

After graduating from Unionville High School, Eugenia attended the University of Western Ontario where she got a Bachelor of Music degree and a Masters of Music in Literature and Performance. At UWO she dipped her toes in the opera performance pool by singing in Puccini’s Suor Angelica. She also sang in The Magic Flute, The Merry Widow and got to do a scene from The Marriage of Figaro as Cherubino. She loves mezzo pants roles and they are a favourite stomping ground for that voice range.

A career in opera is not easy to achieve by any stretch of the imagination. Eugenia has performed numerous times on the banks of the main stream while getting ready for the big break. In addition to the roles she sang while at university, she has performed in various regional centers. She sang in Janacek’s The Cunning Little Vixen at the Banff Opera as Theatre, in The Magic Flute at York Summer Festival and Opera Nuova, was a featured soloist twice with Toronto Operetta Theatre and sang Enrichetta in I Puritani with Opera in Concert. 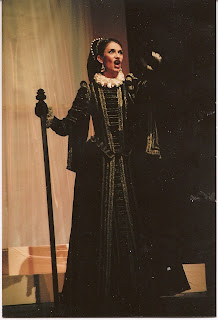 Eugenia Dermentzis as La Zia Principessa in Suor Angelica
The ultimate role that she wants to do: Carmen. It is the perhaps the ultimate role for a mezzo combing extraordinary vocal and physical demands and opportunities for singing and dancing. It is a role for a singer, a dancer and an actor, a complete performer, in other words and this is how Eugenia sees herself.

She will come close to doing Carmen this spring with Ottawa’s Pellegrini Opera but only as an understudy. Before that she will sing in the chorus of Mozart’s La Clemenza di Tito in Opera Atelier’s production in April. In the summer she will be in St. John’s Newfoundland for a part in Dido and Aeneas at the Opera on the Avalon Festival.

This week she will sing the role of Mariana in Luisa Fernanda, a zarzuela by Moreno Torroba that is getting its Canadian premiere in a production by the redoubtable Toronto Operetta Theatre.

Eugenia is nothing if not passionate about her career choice. “I live to be able to act” she says as if there is nothing else that she could possibly do. For her the act of performing is life itself.

“You want to enjoy the art of performing and not just be in the art” she says via Stanislavsly. She has a need to express herself, to create and, ultimately, grow.

If a career in opera does not pan out, do you have an alternate plan? I ask.

There is only one plan and one path as far as Eugenia is concerned. Plan A is to perform and she intends to stick by that plan – there is no plan B.

She has a teaching certificate and she occasionally teaches … make that PERFORMS in classes in York Region.

When you live to be able to act and sing and dance, the whole world becomes your stage, as someone said, and there is no other place for you to stand except on stage. That seems to be Eugenia Dermentzis’s world.
Posted by James Karas at 2:01 PM

Email ThisBlogThis!Share to TwitterShare to FacebookShare to Pinterest
Labels: PEOPLE