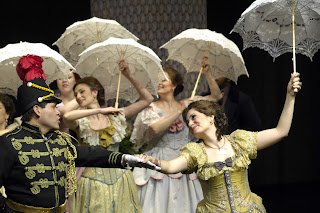 Toronto Operetta Theatre has done it again. They have premiered a work that has been around for almost eighty years and been completely ignored. The work is Luisa Fernanda, a zarzuela by Federico Moreno Torroba which premiered in Madrid in 1932.

Luisa Fernanda is described as a lyric comedy but think of it as operetta in Spanish and you will be close enough o the mark. It has songs, duets and pieces for the chorus as well as spoken dialogue. TOT’s General Director Guillermo Silva-Marin has wisely chosen to have the dialogue spoken in English while keeping the original Spanish for the sung portions.

Silva-Marin directs a lively, well-paced production that is enjoyable on its own and even more so because it is a unique offering. The important factor in every production by TOT is the uphill battle that must be faced and the success that is achieved despite seemingly insurmountable obstacles. Some obstacles are easily defeatable but there are others which St. George could not subdue and he could handle dragons.

One of the major problems is the zarzuela. It has some gorgeous music but it is attached to a tortuous plot. We are in Madrid in 1868 and it is the Feast of St. Anthony, the patron saint of matrimony. Luisa Fernanda Michele Bogdanowicz) is in love with Col. Javier Moreno (Edgar Ernesto Ramirez). Javier is attracted to Duchess Carolina (Miriam Khalil) while innkeeper Mariana (Eugenia Dermentzis) encourages Luisa to go after Vidal Hernando (Silva-Marin).

That is a good plot for an operetta. But Torroba is interested in bigger themes, it seems. “Revolutionary forces take over pockets of strategic importance in Madrid and elsewhere in the country.” That is how the plot summery for Act II opens! 1868 is the year of Spain’s Glorious Revolution when Queen Isabel II was thrown out by republican forces. The zarzuela is as much about politics as it is about love and the usual accoutrements of operetta. We have characters that belong in an operetta caught up in a political and revolutionary maelstrom that does not quite fit into anything.

Luisa Fernanda requires a couple of sopranos, a couple of tenors, a couple of baritones and a mezzo. That’s a pretty tall order and TOT’s batting average is quite high. Michele Bogdanowicz has a bell-like voice that was a delight to listen to and she did a good job vocally as Luisa. My problem with her is that she looked like a woman in her forties rather than a pretty young lady. I am not sure of her age but she failed to exude the youthful exuberance and attractiveness required to have men falling over her.

Miriam Khalil had the proper regal bearing as Duchess Carolina and sang with equal assurance.

Eugenia Dermentzis made a lithe Mariana with a supple and lustrous voice that was simply a delight to hear.

Our hero Javier Moreno looked much better after he got rid of his fancy uniform and Ramirez’s singing was passionate and dramatic. He deserved to get the girl.

Vidal Hernando, the rival for Luisa’s love, does not get her and, vocally at least, he does not deserve her. We were warned that Silva-Marin was suffering from something that is going around and whatever it was, it went to his vocal chords. Let’s just give him high marks for directing the piece and send him a “get well” card.

Baritone Jeffrey Sanders as Luis Nogales tended to be stentorian but he has a rich voice and he was cast as the rabble rouser together with the clownish tenor Joseph Angelo as Vendelor.

A dozen musicians are lined up around the front of the stage in a space no larger than a bicycle lane. That is the orchestra conducted by Jose Hernandez. There is also a vocal ensemble. They do yeoman work and deserve a lot better.

Tipping our hat to TOT’s resilience and panache is not enough. They deserve better facilities and more money for more musicians and better sets. After all, if it were not for them we may never have seen Luisa Fernanda or so many other works that they produce.
_____