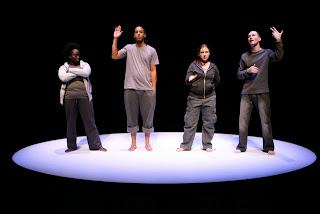 A cultural movement known as kitchen sink drama arose in the 1950’s and it is still with us. It was concerned with the sordid lives of the working class. It was politically motivated and contained well-aimed attacks on the ruling class which was seen as corrupt and uncaring. John Osborne’s Look Back in Anger is a prime example of the genre.

I am not sure if there are many areas of human life not covered by drama, television or the movies these days but the ways available for making a point are clearly endless. Writer Andrew Kushnir has come up with an interesting idea for examining the lives of homeless young people in Toronto: let them speak for themselves.

The result is The Middle Place which is now playing at the Berkeley Street Theatre in Toronto. It is a co-production of Theatre Passe Muraille and Canadian Stage and it is directed by Alan Dilworth.

The play has come about as the result of the collaboration between two organizations. Youth Without Shelter, which as its name suggests, provides shelter for young people in Etobicoke. Project: Humanity (PH) is an organization founded by artists and it focuses on raising social awareness through the arts. The author is the Creative Director of Project: Humanity.

One of the activities of PH is a outreach-out programme in which they go to youth shelters and schools to advance creative thinking. For the play, they interviewed and recorded the comments of caseworkers and youths residing at the Shelter. Those comments were transcribed and shaped into a 70-minute drama by Kushnir.

There are four youths on the stage (Akosua Amo-Adam, Antonio Cayonne, Jessica Greenberg and Kevin Walker) standing on a round platform. They take on numerous roles as troubled youth and Shelter workers who are interviewed by Kushnir from the back of the theatre.

The interview format is followed throughout the play’s 70 minutes and the actors change roles in quick succession. They answer a variety of questions and make revelations about themselves. They talk about mundane as well as important matters such as conditions in the shelter, relations with friends and family, favourite foods and their aspirations.

All of them do indeed reflect a slice of life or, since they play a number of characters, many slices of life. Since the dialogue is transcribed conversations one can hardly doubt its authenticity. None of these people is particularly adept at self-expression or grammatical English. We get expression in the raw with the hand of the author appearing solely as an editor who strings the conversations together into some kind of a whole.

Being a caseworker in a Youth Shelter is not a great career move we learn. Being a resident of a Youth Shelter, needless to say, is considerably worse. I am not sure if I am any the wiser about why these young people are there, how they got there, what is the problem and what are the solutions? The play does not look like a political tract nor a piece of social criticism about what we as a society are or are not doing. It is, I suppose, what it is: a snapshot or a large number of snapshots of life in this Shelter expressed in the unedited words of the people who know it best. I wonder if that is enough to make a play.

The four actors on the stage do commendable work. They change personality, accent at times and must present the words transcribed quickly.

The social milieu of the play or the subject matter of drama should only be limited by the imagination of our playwrights. But I still prefer the old structure of a beginning a middle and an end and the hand of a writer to mould the subject of his/her choice into a unified piece of drama. Reality no matter how brutal or sordid is not necessarily good theatre.