FRANKENSTEIN FROM THE NATIONAL THEATRE ON THE BIG SCREEN 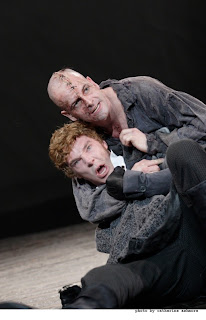 Reviewed by James Karas
Mary Shelley’s Frankenstein is probably the best known least-read novel ever published. It has spawned not just movies and television programmes but an entire mythology around a monster called Frankenstein. We all know what he looks like and don’t bother us with the fact that the frightful creature is not called Frankenstein at all and that the latter is in fact his creator.
Nick Dear has written a new play based on the novel and Britain’s National Theatre has given it a major production directed by Danny Boyle. On March 17, 2011 the production was beamed to movie theatres around the world “live” or more or less live. The same day’s performance in London was taped and broadcast in Toronto a few hours later.

This Frankenstein is two very different products seen in succession. The first part is an almost fully fledged ballet and the second part is more of a domestic drama having to do with a scientist who created a monster.

The “ballet” portion is spectacular, complex and moving. We see the “birth” of a hideous human being. He pushes through the membrane of what could be a globe or a woman’s uterus and crawls out, deformed, sutured up and covered with slime. Like a newborn animal, he cannot stand up or speak and we witness the slow process of his finding the strength to stand up and find his voice.

The Olivier stage of the National Theatre is equipped with a massive chandelier and there are flashes of light as if the sun were making its first appearance. The creature encounters some human beings who beat him up and he ends up on a farm where he establishes a relationship with a blind old man called de Lacey (Karl Johnson). De Lacey, his son Felix (Daniel Millar) and daughter-in-law Agatha (Lizzie Winkler) are dressed like 19th century farmers but appear to be at the beginning of civilization when man turns from hunter to grower.

Up to this point, the creature has seen only cruelty in his encounters with people and his creator, Victor Frankenstein (Johnny Lee Miller), has only been seen fleetingly.

The scene then moves to the shores of Lake Geneva where we meet the Frankenstein family and Victor’s fiancée Elizabeth (Naomie Harris). Victor gave life to the monster in an outburst of hubris and now has to deal with it. The monster wants love and wants a woman. Victor becomes frightened of him and has the house guarded on his wedding night. The monster appears in Victor’s bedroom where his bride is waiting for her husband and rapes her.

The flashes of blinding light are almost gone during the domestic half and there is a considerable drop in theatrical excitement as compared to the “ballet” portion of the production. The sheer theatricality of the whole thing, however, is simply breathtaking.

The role of the monster is alternated between Benedict Cumberbatch and Jonny Lee Miller. It is a defining role and Cumberbatch was playing it the night of the broadcast. He slides, slithers, cowers and dances on the stage with some extraordinary vocalizations in an unforgettable performance. The rest of the actors simply fade in comparison and no one comes close to the demands made on the actor playing the Creature.

No doubt seeing the performance live on stage would be spectacular but there were a few advantages to seeing it in the movie theatre. Some of the overhead shots and all the details that close ups can bring could not be seen by the audience in the Olivier.

The tendency in bringing live theatre and opera to local theatres via satellite is picking up and one can only view it with excitement. Most of these productions would have closed down and never been seen by most of us. Now the National Theatre, the Metropolitan Opera, La Scala and, it is hoped, other major venues could become familiar territory to us. The movie screen, however big, will never take the place of a live performance but it is much better than the heretofore alternative.

_____
Frankenstein by Nick Dear based on the novel by Mary Shelley was shown at the Scotiabank Theatre Toronto, 259 Richmond Street West, Toronto ON and other theatres on March 17, 2011. It will be shown again on March 31, 2011. For more information visit http://www.cineplex.com/