BROTHEL #9 PRESENTS UNSEEMLY SIDE OF LIFE IN INDIA 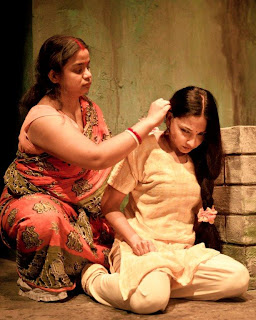 
Brothel #9, Anusree Roy’s new play, presents a picture of life in India that most of us would just as soon not know about. Rekha, a young girl is sent by her brother-in-law from her village to Calcutta to work in a light bulb factory. In fact she has been sold to a brothel keeper.
Jamuna, the brothel keeper is a fat, sluttish, unkempt, ugly woman and a prostitute herself. Soon after Rekha arrives at the brothel, Salaudin, the local cop shows up. He takes Rekha to a room and, while Jamuna is singing, rapes the young girl. We hear her screams and Jamuna does nothing about it. In a brothel, woman are mere things that exist for the pleasure of men, right down to using toothpaste or fertilizer to have a dry pudendum and thus, presumably, increase the pleasure of their customers.
Salaudin, a clean-cut man, has an incredible sexual appetite (he visits Jamuna twice a week faithfully and has a wife and a son) and eventually gets Rekha pregnant. We learn that he is the father of two children by Jamuna both of which he drowned by holding their heads under water. One does not need any more examples to illustrate how cheaply life is held.
Rekha tries to survive in the brutal milieu. She works hard and she refuses to abort her baby. Salaudin promises to get her a house and move her there. He is evicting some peasant from their house (one assumes it is part of the job) and he can get a nice house cheaply. Rekha is prepared to go along with the scheme but it falls through when Salaudin decides he cannot leave his wife and son. One wonders what moral universe this man occupies. He has murdered two of his children and is prepared to do the right thing by Rekha but cannot go through with it because of his family. There is something seriously wrong with this world.
The other brute of the play is Birbal, Jamuna’s partner, who goes to pieces when his wife dies in the village. He goes back to see her in her last moments and comes back quite distraught. The moral and physical morass inhabited by the three characters is beyond redemption even if there may be flashes of some kind of humanity.
The real story is Rekha’s development from a terrified you girl to a tough woman who will survive despite the brutality surrounding her. She finds the courage and stamina to go on and save her child.
The slim and long-haired Pamela Sinha plays Rekha and we see the development from terrified rape-victim to a strong-willed woman. Author Roy plays the low-life Jamuna with relish while Sanjay Talwar is a matter-of-fact brothel customer, rapist and murderer. He seems just too clean-cut to be convincing as the monster that he is. Ash Knight’s Birbal is a more typical creep.
Nigel Shawn Williams directs this flawed but deeply disturbing play but a risng new playwright.
All the characters speak in deep Indian accents which, I am afraid, were not always easy to follow. Roy has decided to include a lot of Indian words and phrases in the dialogue. I am not sure what the point is of including something that most of the audience cannot understand. At times I was not sure if the characters were speaking Indian words or I was not catching the accent.
A programme note explaining a few things about the cultural milieu of the play and perhaps some help with the language used would have been a very good idea.
______
Brothel #9 by Anusree Roy opened on March 3 and will run until March 27, 2011 at the Factory Theatre, 125 Bathurst Street, Toronto, Ontario. www.factorytheatre.ca.