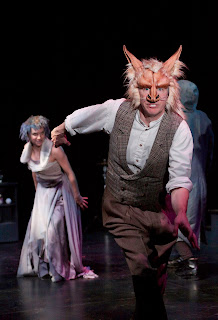 Shakespeare’s plays are not a natural playground for the highly talented Soulpepper company. They have tackled six of his plays in the last ten years with mixed results. The last time they did Shakespeare was in 2008 with a pretty bad production of As You Like It but before that, in 2006, they did deliver a brilliant King Lear.

This year they are offering a marvelously imagined production of A Midsummer Night’s Dream directed brilliantly by Rick Roberts. It is now playing at the Young Centre in the Distillery District.

The play is done in modern dress with very little in the way of a set. There are three panels at the back of the stage where light projections create the magical world of the fairies. Roberts makes excellent use of the fairies who act as a Chorus. All of the actors except Puck double up as fairies. They wear hoods and are thus not recognizable from the other roles that they play and are very effective.

Most of Midsummer Night’s Dream takes place in the woods outside Athens during the night and Roberts has choreographed the movements of the fairies and the four lovers with the use of flashlights and spotlights effectively and unexpectedly. There are numerous nice directorial touches to add to the humour.

Now let us praise the actors considerably less effusively, I am afraid. Most of the Shakespeare’s poetry and even his prose does not come trippingly upon their tongues. The best at her lines was Trish Lindstrom as Hippolyta and Titania. She has a lively, full-throated delivery with a good sense of the poetry. A fine performance.

Oliver Dennis has the lead comic role of Nick Bottom, the weaver, who is turned into an ass and plays the hilarious role of Pyramus in the interlude. The other artisans of the interlude are very funny as well with Derek Boyes as Starveling, Michael Hanrahan as Quince, John Jarvis as Snout, Michael Simpson as Flute and William Webster as Snug.

The results are less felicitous when we get to the actors who deliver some of the most mellifluous poetry ever written. Some of them seem to have no idea that they were not speaking just colourful if somewhat unfamiliar prose but actual iambic pentameters. Others had better command of the language and its delivery.

Ins Choi who played Theseus and Oberon spoke so slowly in the first role I thought we would be there until breakfast. He picked up the pace and was much better as Oberon.

Most of the success of Midsummer rests with the four lovers. They can perform verbal and physical acrobatics, be very funny and provide a thrilling night at the theatre. They need fine choreography for the very funny physical altercations and, of course, the voices for the lyrical poetry. Here success was indeed mixed. The physical choreography, although mostly good, failed to lead up to the desired climax. The delivery of the poetry was even less felicitous. Abena Malika as Hermia and Karen Rae as Helena failed to rise to the occasion. When the two are duking it out, Helena insults Hermia by referring to her small stature and in fact calls her a puppet.

The incensed Hermia lashes back but has difficulty coming up with the proper riposte until it finally comes to her: “How low am I, thou painted maypole?” she shouts. The insult should be blurted out with perfect pitch and bring the house down. For some reason the line loses most of its effectiveness in the mouth of Malika. It is not the only line that misfires.

Mike Ross as Lysander and Brendan Wall as Demetrius, the young lovers, are effective in the physical aspects of their roles but do not do as well with the poetry.

There are a number of such faux pas throughout the production. Unfortunately, they do take away something from the brilliant re-imagination of a great play. A production that is well-directed but lacks the actors to make a great night at the theatre.
__________

A Midsummer Night’s Dream by William Shakespeare opened on February 23 and will play in repertory until April 23, 2011 at the Young Centre for the Performing Arts, 55 Mill Street, Toronto, Ontario. www.soulpepper.ca 416 866-8666.
Posted by James Karas at 10:54 AM