OH, WHAT A LOVELY WAR – REVIEW OF HART HOUSE PRODUCTION

Hart House Theatre is to be commended for its choice of Oh, What A Lovely War as part of its 100th Anniversary Season. It is a biting music hall style satire on World War I that was created by Joan Littlewood, Theatre Workshop and others and was first presented in London in 1963.

Director Autumn Smith has given the piece a modern look by treating it like a video game with extensive use of avatars and projections. We see numerous scenes of trenches where soldiers are simply zapped as if they are just images in a video game. There are numerous photos and slides containing information about battles fought, gases used and casualties suffered. It is an image of war that does not lose its terror no matter how many times we have seen it.

The production has twelve actors, six men and six women, who play more than thirty roles among them, including seven avatars. The M.C. is a talking, computer generated head on the screen, speaking in a sonorous voice with some attempts at humour that invariably misfired. 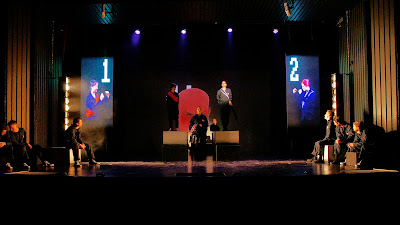 Unfortunately, the overall success of the production is limited. I will list some of the reasons why it did is not all that successful. I should note that all the actors are amateurs and have the right to be judged as such. There are many people who are listed as working behind the scenes. All of them deserve kudos and gratitude for the work that they do. Director Autumn Smith is a professional woman of the theatre and the production’s approach belongs to her.

All the actors are miked and their voices come through a speaker above the stage. The only way one could recognize the speaker was by looking for whose lips are moving. Many phrases were incomprehensible. The actors attempted different accents and failed to always speak clearly.

Joan Littlewood who directed the original production had the soldiers (but not the officers) dressed like pierrots, the clowns of commedia dell’arte. There are many choices of costume that the director and designer could have made. In this production, Costume Designer Yasaman Nouri has them all dressed in navy blue overalls and they do not generate any laughs or the feel of a satire. Smith prefers dark shades to light and on a number of occasions we saw dimly lit actors or silhouettes of them in the dark.

The production follows a chronological sketch of events. We first hear representatives of France, England, Germany, Austro-Hungary, Russia and Serbia recite the inventory of armaments and armed forces that each nation had before the war. They are all armed to their teeth but war is considered impossible.

We proceed through the declaration of war, recruitment and training of soldiers and the initial battles. We soon reach one of the most moving evens of the war, the meeting of German and British soldiers on Christmas Eve 2014 in No Man’s Land. It was an extraordinary event when supposed enemies reached across to each other as human beings and shared their humanity. In this production the scene falls flat. 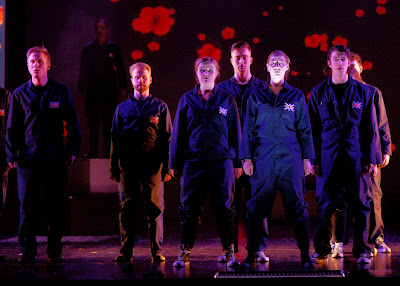 The description of the gases used and their frightful efficacy from blindness to death is simply horrendous and astounding.

The singing is usually a cacophony but we do not expect musical entertainment. These are young people caught in the killing fields of Europe and if they survive they can speak to the futility of war.

The satire is best felt when a new commander-in chief of the British Expeditionary Force is to be chosen and the qualities of the two contestants are recited as if they are on a television game show. Unfortunately too many details are given about the two contestants, General William Robinson and Field Marshal Douglas Haig, and the satire loses its grit.

The play seems to be a seriously edited version of the original and there is no indication of what changes have been made, who made and the reason.

The amount of work and the roles undertaken by the actors is reflected in the following cast lists:

The idea of making Oh What A Lovely War resemble a video game may resonate better with the younger generations. Unfortunately it did not resonate with me.
__________
Oh What A Lovely War by Joan Littlewood, Theatre Workshop and Charles Chilton; Research by Gerry Raffles after treatments by Ted Allan and Others opened on February 28 and will play until March 7, 2020 at Hart House Theatre, 7 Hart House Circle, Toronto, Ont.  www.harthousetheatre.ca

James Karas is the Senior Editor - Culture of The Greek Press
Posted by James Karas at 12:24 AM