When I stepped out of the theatre at the end of the performance, I saw two young men sitting on a couch looking intensely at the programme. “Who was the jogger?’ asked one. His friend did not know. “There were seven women” said the other and they started counting the cast list and came up with only six. “Who were the women in the trench coats with the wigs?” They had no idea.

The first question to be asked, I suppose, is what is the play all about? Is it a searching examination of the lives of a group of women from Hong Kong who live in Vancouver? By their command of English we can infer that they are born in Canada or immigrated at a very young age. One of them does have a poorer command of English but her attempt at an accent is not that great. I will leave it that. 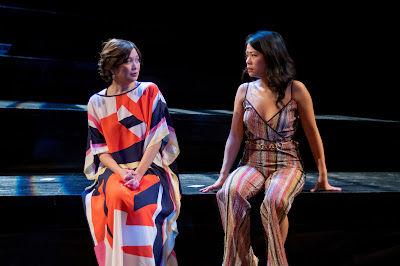 Ma-Anne Dionisio and Lindsay Wu. Photo by Joseph Michael Photography
If not an examination, is it a satire, a send up by the author of some shallow, greedy, selfish, abusive and at times utterly stupid women? A satire could include some lampooning and generate some laughter. The play generated a couple minor giggles by a handful of people but there was not a single sample of laughter. Satire could be ironic or sarcastic but here was no evidence of that either.

The play is structured as a series of monologues by the six women with a few minor examples of dialogue. The set is made up of half a dozen black risers on which the characters walk on and speak their lines. They could be steps leading up or down the success ladder.

The central character is Penny (Lindsay Wu) who appears first as a contestant or perhaps winner of a beauty contest. She speaks to her audience seriously or uses the blather of a beauty contest winner. She wants to address women now and in the future and convince them that they can do it. Her first concern was her lipstick and her nails and I am not sure how seriously we can take her.

Penny lives in a penthouse high above the city and she is used to expensive clothes, trinkets and a lifestyle of pleasure. She will run into trouble and eventually be gruesomely gang raped. Is she a prisoner and a victim of a male dominated society? Is she just a pretty, shallow, grasping woman who goes with men for the money and the presents that she can resell? The characterization is not particularly well drawn. She looks like a victim of her own greed, self-indulgence, shallowness and lack of common sense.
Penny is a protégé of Tawny Ku (Ma-Anne Dionisio) whom she calls Auntie even though they are not related. Auntie is loaded and she displays all the arrogance, irresponsibility and obnoxiousness of some plutocrats. She seems to go through protégés for some reason that escaped me but her overweening greed catches up with her. When her wealth crashes, she tries to find her humanity by getting in touch with her daughter. By that time we have lost all interest in this bitch.

Rosie Simon plays Banker Wong and we are grateful for the help in recognizing the character. Like Auntie, Wong understands almost nothing else but money. She wants us to know that she is tough on people without the requisite credit rating and takes pride in the eight quarters of profitability of her bank. She does run charity marathons and is, again, proud of the money that she has raised. But we are given a clue as to her totally non-altruistic reason for fundraising and her last minute cry for help falls on deaf ears. She is the jogger. 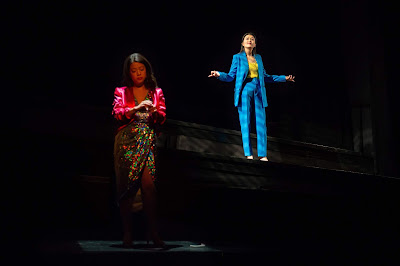 Lindsay Wu and Rosie Simon Photo by Joseph Michael Photography
We have another Auntie, Charmaine, who makes soup and runs a massage parlour. Yes, it is a brothel that takes women who may have no choice and sells them for sex. Luisa Zhu plays Charmaine. One of her victims is Sherry (Belinda Corpuz) a pathetic young girl who tries to emulate the grand life style of sex-for sale Penny but fails at it. Her final appearance is a gut-wrenching scene.

We also have Dealer Li (Zoe Doyle). She was a simple worker and she and her husband were doing reasonably. Greed set in and he ended up losing what they had at the casino while she worked there watching other people blow their money. She is fired from her job for a spurious reason and I am not sure if it was because she is a woman of just plain rotten conduct by some creep of either sex.

The acting is largely monochromatic because it is based mostly on monologues and we develop limited sympathy for the characters who are not very well developed.

Money and its corrupting influence and the fickleness of fortune have been the subject of myth and drama since the time of King Croesus. Ms Chan’s play is a welcome addition to the genre. There are some riveting moments but the play needs some better focus, more clarity and better character development.
__________
Lady Sunrise by Marjorie Chan, directed by Nina Lee Aquino, premiered on February 20 and will run until March 8, 2020 at Factory Theatre, 125 Bathurst Street, Toronto, Ontario. www.factorytheatre.ca/

James Karas is the Senior Editor – Culture of The Greek Press
Posted by James Karas at 6:48 PM