The Canadian Opera Company’s new production of Engelbert Humperdinck’s Hansel & Gretel has so many virtues one feels downright churlish to mention some of its less admirable aspects. Alas, we must deal with both.

Richard Strauss by happenstance conducted the first production of the opera and he declared it a masterpiece without hesitation. That is about as good as a Good Opera Seal of Approval as you could get in 1893 and not too many people have taken issue with the quality of the work.

It is based on the fairy tale by the Brothers Grimm which Humperdinck’s sister Adelheid Wette molded into a libretto and it was a hit from the start. With its wealth of gorgeous melodies and luscious music, the story of children in the forest with a Sandman, a Dew Fairy and a Witch with unique gastronomic tastes, it can hardly fail. 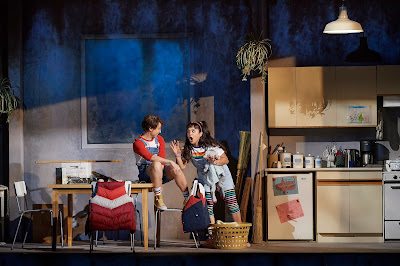 Emily Fons as Hansel and Simone Osborne as Gretel. Photo: Michael Cooper
The singing is superb. Canadian soprano Simone Osborne (a regular with the COC since 2013) has a clarion voice and sings a gorgeous Gretel. American mezzo-soprano Emily Fons has a big and lusty voice and as Hansel makes a perfect partner for Osborne.

Hansel and Gretel are of course children and Osborne and Fons, though young, are not. Their costumes indicate their youth but that is not enough. They have mastered the movements, mannerisms and gestures of children to the point where we never doubt that they are children. Amazing performances.

Ontarian operatic veterans Kristina Szabo and Russell Braun handle the roles of the mother Gertrude and the father Peter with their usual assurance and exceptional singing.

The role of the Witch, usually sung by a mezzo-soprano, is given to Torontonian tenor Michael Colvin who approaches the meaty part with relish. He wears a very colourful, clownish costume and sings with nasty delight. Marvelous.

The young Canadian soprano Anna-Sophie Neher is cast as both The Sandman and The Dew Fairy and gets to sing some of the most beautiful arias of the work. She does superb work with her deliciously lyrical voice.

Johnannes Debus conducted the COC Orchestra and did more than justice to Humperdinck’s marvelous and superbly orchestrated score.

The production is directed by Joel Ivany with set and projection designs by S. Katy Tucker, costume designs by Ming Wong and lighting design by JAX Messenger.

They have set the opera unapologetically in an apartment building in Toronto occupied by people of the lower rungs of the economic ladder. We are treated to panoramic views of the city and the apartment building where we see through the windows of numerous units. Then we zero in on several apartments on two floors. Those apartments are the central but very changeable set of the production.

We are treated to extensive use of projections and a kaleidoscope of colours that are eye-catching and impressive. There is some indication of a forest in the midst of all this but it quickly disappears and we are kept so busy looking at everything else that we hardly notice the forest. 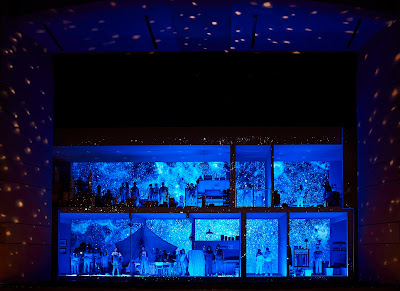 A scene from the Canadian Opera Company’s Hansel & Gretel. Photo: Michael Cooper
Then it gets murky and confusing. We know the fairy tale and we know the plot of Hansel and Gretel. Ivany has something happening in one or two apartments at most times and there are occasions when I have no idea what is happening there. Hansel and Gretel are dealing with the Witch below and someone in the upper apartment is drinking something that he took from the fridge and a woman in another apartment is doing something else. I try to ignore them but what in the world are they doing?

Hansel and Gretel’s first meeting with The Witch takes place in the corner of the stage and they stay there for a while. Why? The oven in which the children are to be roasted is a large wooden cabinet. We don’t need anything more graphic, thank you. But what is Peter doing coming on the stage, getting in the oven and shaking it? Who is the woman that comes in from the other side of the stage and speaks with The Witch and disappears? What did I miss?

Did I tell you about the cute dog in the upper apartment? And my companion noted that the children go and sleep in a strange man’s apartment. “Shouldn’t we be calling social services?” she asked.

All of this was unnecessary, annoying and confusing. It has the effect of making the post-performance conversation focus on the needless aspects instead of the main point which was a splendidly sung and otherwise wonderful production.
_________
Hansel and Gretel by Engelbert Humperdinck is being performed seven times between February 6 and 21, 2020 at the Four Seasons Centre for the Performing Arts, 145 Queen Street West, Toronto, Ontario. Tel:  416-363-6671. www.coc.ca

James Karas is the Senior Editor - Culture of The Greek Press
Posted by James Karas at 2:03 AM