OIL is an extremely ambitious play by British playwright Ella Hickson. It premiered in London in 2016 and ARC is producing it for the first time in Canada. The play is done in Geary Lane in Toronto. It is an empty factory that holds fewer than 100 people (I did not count them) and it has severe limitations for a satisfactory production.

There is some excellent acting and dramatic scenes but the play itself is tough to produce and its shortcomings become more glaring in the circumstances.

Hickson tackles the rise and fall of the imperialist West as seen through its dependence on oil from 1889 to 2051. It starts in 1889 on a farm in Cornwall, England where everyone speaks with a southern Ontario accent. It is not the best way to do it but it is much better than having Canadian actors attempt an English accent. Most of them cannot do it. 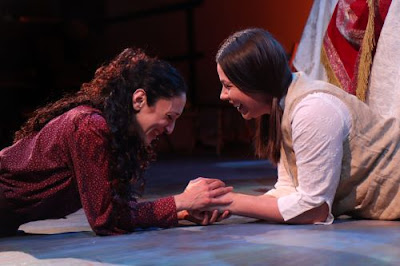 Bahareh Yaghari and Samantha Brown. Photo: Nicholas Porteous
The Singer family is barely scraping by during a freezing winter and we are met by a melodramatic scene with a loving and strong-willed wife facing a tyrannical mother-in-law while her husband is fighting with his brother. The wife is May (an outstanding Bahareh Yaraghi) who is married to the iron-fisted Joss (Cyrus Lane) and the mother-in-law is Ma Singer (Deborah Drakeford).

The future has arrived in the form of kerosene which will change the world. The pregnant May walks out of the family and into the future.

The future is the desert near Tehran in 1908 where oil has become big business. May is a servant in a club and has bratty and obnoxious daughter, Amy (a superb Samantha Brown). May is working with Thomas (Ryan Hollyman), a dishrag of a server and meets a despicable naval officer (played by Courtenay Stevens) who tries to seduce her. She walks out into the future again.

The future is in Hampstead in 1970 and May is a tough oil executive facing disaster as Colonel Gadhafi is taking over and nationalizing the Libyan oil fields. In this segment, Thomas is a mealy-mouthed corporate man while Mr. Farouk (Nabil Traboulsi) as the Libyan agent is making it clear that the days of cheap oil taken by the foreign oil companies are about to end.

In 2025 May and her daughter are in Kurdistan. Amy has become more obnoxious, if possible, and May is defending raging imperialism and capitalism while trying to communicate with her daughter.

It is 2051, we are back in Cornwall and the future is here as is the end of Western civilization as we knew it. May and Amy are freezing because there is no more oil and the world has been taken over by China. It uses nuclear fuel from the moon (if I understood correctly) which will last forever. We go back to the beginning (illusion, delusion?) and the play is finished as we are. 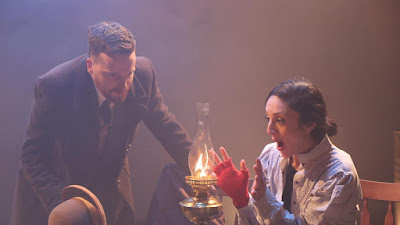 Nabil Traboulsi and Bahareh Yaraghi. Photo: Nicholas Porteous
That is a lot of ground to cover. Hickson covers or wants to cover the evils of imperialism, capitalism, use of fossil fuels and human and corporate greed quite mercilessly. She combines that with family and personal issues as the intrepid May moves from a backward farm to the world of a single parent amid world issues. As if that were not enough, Hickson catapults into the future.

Directors Aviva Armour-Ostroff and Christopher Stanton have an amazingly talented cast to work with and put them through roles that cover almost two centuries. They do outstanding work. I have named several of them and will add Cyrus Lane as Joss, Shadi Shahkhalili in the three versions of Anne and Lily Gao as Fanny.

Set Designer Jackie Chau has very limited space in which to work but she does her best to take us from the farm to the back room of posh club and back to the farm with a couple of pit stops in between.

Hickson tries to cover far too much within the limitations of two and a half hours where there is no room for detail or nuance
__________
OIL by Ella Hickson, in a production by ARC continues until March 21, 2020 at the 360 Geary Lane Toronto Ont. www.arcstage.com


James Karas is the Senior Editor - Culture of The Greek Press
Posted by James Karas at 10:06 PM