Box 4901 is a new play by Brian Francis that is based on a simple and unprepossessing premise yet manages to deliver a wonderful night at the theatre.

Francis is 49, gay and a writer. He has written three critically acclaimed novels (Fruit, Natural Order and Break In Case Of Emergency) and many humorous pieces but Box 4901 is his first work for the theatre and, he tells us, it is autobiographical.

Twenty eight years ago when he was 21 he put an ad in the classified section of a newspaper searching for love. He got a number of letters that he replied to but he did not answer 13 of them. He decided to answer those letters now. The letters are read by 13 actors and Francis himself (who is not an actor) reads his replies.

How do you get a 75-minute theatrical performance out of that? 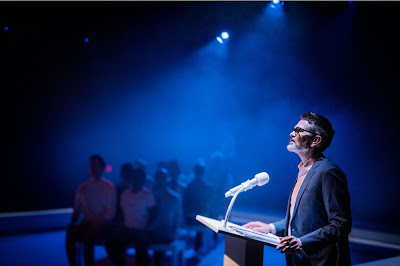 Brian Francis and company. Photo: James Heaslip
The letters are at least interesting and frequently entertaining, revealing of the writers’ characters and a picture of the life of gay men in the early 1990s. Francis’ replies are the clincher to the success of the play. They are variously perceptive, literate, sarcastic, dismissive, kind and always worth hearing. Francis obviously rejected the invitations of the men (except one) in 1991 and his replies today with his current view or as he wishes he had replied in his youth. His skillful writing is touching, humorous and impeccable.


All 13 letters are interesting especially when we hear Francis’ reply. One young man writes about himself and includes his love of exotic foods as one of his appealing traits. Francis’ reply is curt: “Where do you find exotic foods in southern Ontario?”

The 35-year old waiter is dismissed as too old.

The athletic homosexual who brags about his muscular build gets short shrift. The teacher who cannot spell the word “gorgeous” is also ignored.

The play also gives a glimpse of what life was like for a gay teenager and young man a mere 28 years ago. Francis never had lunch in the school cafeteria until he was in grade 13. He did not have any male friends and he did not want to sit with girls. He and his gay friends went to a “big” city, Hamilton, to check things out. Being gay in a small town is even more difficult than in a large city. When one of the men who replies to the ad gives his address, Francis is quite shocked. The news of his homosexuality could easily get out. 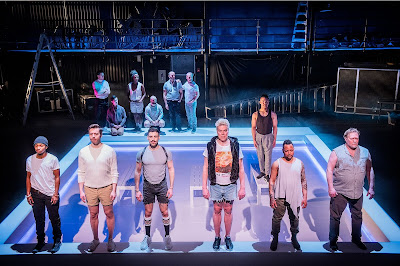 The company/ Photo:James Heaslip
The World Health Organization delisted homosexuality as a mental illness in 1992. Read the name of the organization and the date and put your jaw back up.

Francis reads his replies from a lectern. The 13 men are in a square area of the stage and they are occupied in various ways throughout the performance. They do some miming, some almost dance sequences, move around the playing area and rearrange three white benches.  Kudos to director Bob Kempson for thinking of ways to occupy the actors who otherwise have nothing to do after reading their letter. Kempson is also credited as a co-creator of the play.

Box 4901 is touching, humorous, intelligent, literate and simply marvelous theatre.
_____________
Box 4901 by Brian Francis, co-created and directed by Rob Kempson, in a production by timeshare performances with support from Buddies in Bad Times Theatre, opened on February 27 and will run until March 8, 2020  at Buddies in Bad Times Theatre, 12 Alexander Street, Toronto, Ontario.  www.buddiesinbadtimes.com.  www.box4901.com

James Karas is the Senior Editor - Culture of The Greek Press
Posted by James Karas at 10:33 PM