Can you go wrong by producing H.M.S. Pinafore?

Neither can Toronto Operetta Theatre in its staging of Gilbert and Sullivan’s’ delightful operetta for its early spring season. It is a spirited production with the gorgeous melodies and humour that should please Savoyards.

You know the story, no? Able Ralph is madly in love with the delightful Josephine who happens to be the Captain’s daughter. Oops! An able seamen lowly born cannot reach for the daughter of a Captain. Solution, please.

The Captain who is punctilious and never, ever (well, hardly ever) sick at sea wants his daughter to marry Sir Joseph Porter, First Lord of the Admiralty. Josephine tells him that she has given her heart to a lowly sailor (and thus justifies the subtitle of the operetta The Lass That Loved A Sailor). 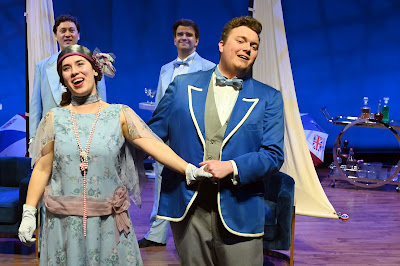 Holly Chaplin as Josephine, and Ryan Downey as Ralph.
Photographer: Gary Beechey (BDS Studio)
Sir Joseph is one of the delights of the operetta from his entrance when he explains that he got to be “the monarch of the sea, / The ruler of the Queen’s navee.” He is a pompous fool and a great comic character.

And there is Little Buttercup, the lowborn, bumboat woman (keep it clean – she sells goodies to sailors on board ship) who has matrimonial designs on the exalted Captain. Solution, please.

The production is generally well sung and generates considerable energy. Ryan Downey as the lover Ralph has a sweet tenor voice that he puts to good use to express his ardor for Josephine. He sings that “The Nightingale Sighed” and how as a suitor lowly born he loves “A Maiden Fair to See” with fine intonation.

Lovely-voiced soprano Holly Chaplin is Josephine whose love is alive but hope is dead she moves us in her ballad “Sorry her lot who loves too well.”  Stick around and Ms Chaplin will sing of rapture unforeseen.

Baritone Bradley Christensen as Captain Corcoran has an imposing physique and an impressive voice. His Captain has class issues, parental control problems and his own love difficulties. With Christensen’s vocal authority and stage presence, he solves all of the Captain’s difficulties.
Mezzo soprano Rosalind McArthur as Buttercup tells us that she has no idea why she is called poor, sweet, little Buttercup. She sells all kinds of goodies to the sailors she also has the key to solving all the serious issues in the operetta. Ms McArthur has good comic talent and carries her role very well vocally. 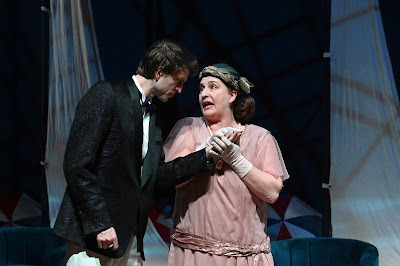 Bradley Christensen as Captain Corcoran, and Rosalind McArthur as Buttercup
Photographer: Gary Beechey (BDS Studio)
Gregory Finney is a fine comic talent with good vocal chords and he gets the juicy role of Sir Joseph. There are no complaints about his singing but director Guillermo Silva-Marin has misdirected him as the pompous, nincompoop First Lord of the Admiralty. There is no snobbery, pomposity or ridiculous aristocratic behaviour. Sir Joseph is just a funny guy on the ship. He needs to stand out.

Part of the issue may be the costumes. Almost all of the characters looked like they just left a wedding. Tuxedos for the men, gowns for the women. Very little indication of status and rigid class structure that play an important part in the operetta. Naval uniforms work better. The costumes are supplied by Malabar Ltd. and the choices must be extremely limited. There is almost no indication that we are on a ship but all of that can be ascribed to paucity of funds. But in the case of Sir Joseph, an admiral’s outfit would have made a difference.

The chorus was splendid and the orchestra conducted by Derek Bate did a terrific job.

For those who want to be critical about TOT’s productions, do they know that it is the only company in Canada devoted to the production of operettas?
____________
H.M.S. Pinafore by Gilbert and Sullivan opened on March 4 and will be performed until March 8, 2020 at the Jane Mallett, Theatre, St. Lawrence Centre for the Arts, 27 Front Street East, Toronto, Ontario. Tel:  (416) 366-7723. www.torontooperetta.com

James Karas is the Senior Editor- Culture of The Greek Press
Posted by James Karas at 10:16 AM