Alan Dilworth, the director of The Events, describes the play as “one of the most simple and yet complex” he has ever encountered. As a two-hander with a choir, it looks simple. After that following the plotline and making much out of it becomes a pretty tough task.

The production uses a different community choir for each performance and the City Choir was present on opening night. They sang several times and participated a bit in the play but I did not quite get why they were present.

After the singing by the choir we meet a priest called Claire (Raven Dauda) and a young man whose has an Aboriginal name that I did not catch and is also referred to as Gary. He gives a startling image of an aboriginal boy standing on the rocks above the Illwarta River in Australia when sail ships arrive from England for the first time. They carry convicts, religion, disease and “instruments of objectification.” If he were there, this aborigine warrior would have told the boy to kill them all. OK, but “instruments of objectification”? 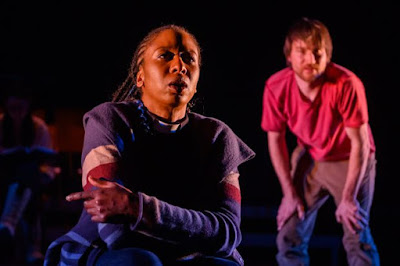 Raven Dauda and Kevin Walker. Photo: Dahlia Katz
From then on, Claire and the young man assume a number of different identities that are difficult to follow and even more difficult to understand.

Claire tells us that she and her lesbian partner lived happily at first and then Claire became a priest for the poor and vulnerable. Something terrible happened to her. We are never quite sure what is was but it involved a man with a gun who confronted her and another woman and shot the latter.

The incident was so terrible that she feels she is entitled to a visit from God.

The young man imagines being a Viking warrior, going berserk and slaughtering people. In his view the best thing for the world is a huge conflagration that burns everything out of existence. He wants to make his mark on the world now using violence. After all Jesus had established a religion by his age, Bob Geldof has saved Africa and Gavrilo Princip had started World War I.

Members of the choir throw questions at him as if he were a pop star, asking about his favourite song, favourite movie, if he drinks, is he a virgin, what is his diet. He tells us that the aboriginal warrior follows the Paleolithic diet as described in the Sunday Times Lifestyle Supplement. All of this is said with a straight face and barely raises a giggle from the audience. This play has no humour at all.

The dialogue gets more confusing as we get an infusion of more jargon. We look for a snippet of clarity and find is more confusion. Claire relates the story about the birth of a boy in a hospital where she is a nurse. She takes the newborn and suffocates him. That seems clear.

There is a supposed ceremony to bring back people’s souls. A choir member (apparently with no acting experience) tells the young man that what he asking he to do is depressing.

Claire gets a job at Peterhead Prison. The two start fighting, Claire wins and spits on him. She describes the incident with the gunman who kicks the door open where she and another woman are. She has sex with him and his soul returns. More torture and violence.

The play reaches the end after about eighty minutes and we go back to the beginning where the young man shyly enters the room with choir and is received by the priest Clare.

The set by Ken MacKenzie has several rows of chairs to accommodate the choir, a piano and open space. Jacqueline Teh is listed as Music Director and I assume she was the woman playing the piano.
Dauda and Walker speak matter of factly about the horrible things that they describe and some of the jargon that they express. It is the perfect way to express what the play offers.

“One of the most complex …plays” that Dilworth has ever encountered went pretty much over my head, In the program note he states that “I hope to present the possibility – an invitation for a shift in one’s narrative of themselves, their situation or the world around them.” How I wish he had.
_______________________
The Events by Davis Greig in a production by Necessary Angel Theatre Company opened on March 4 and will run until March 15, 2020 at Streetcar Crowsnest Theatre, 345 Carlaw Avenue, Toronto, Ontario M4M 2T1. www.necessaryangel.com.  http://crowstheatre.com/
Posted by James Karas at 10:01 PM