The body of a two-year old child is washed up on the beach: a small boy is rescued from a bombed building; hundreds of thousand risk their lives to cross thousands of miles of water in rickety boats; millions live in horrible conditions in refugee camps. That is the face of refugees today and a stunning condemnation of our inhumanity. It is a story that is impossible to describe or comprehend.

The Stratford Festival has decided to tackle the issue head on by producing a play called The Aeneid. 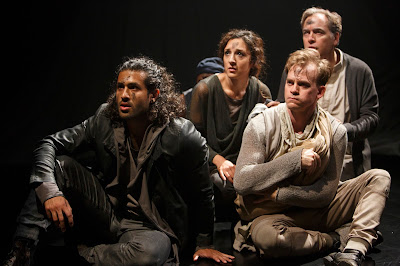 Members of the company in The Aeneid. Photography by David Hou.
Let’s look at the positive side. A title like The Aeneid has a lot of cachet. It connects us to Virgil’s great epic, the founding myth of the Roman Empire. Check. The play is written by Olivier Kemeid, a French-Canadian playwright and in a nation of two latitudes we need to pay attention to both of them. Check. The translation has been commissioned by the Stratford Festival (Check) and done by Maureen Labonteé. It deals with a current issue of world-wide importance. Double check and don’t say anything when you realize that it is somewhat stale dated.

Let’s look at the negative side. The play has almost nothing to do with Virgil’s epic. It borrows the title and a few names but any resemblance to The Aeneid is almost coincidental. Yes, you will recognize Queen Dido of Carthage and the trip to the Underworld but they won’t help you much.

Virgil’s Aeneid is about the founding of Rome and if Kemeid wants to pull himself up by his bootstraps and make it into a story of refugees relevant to today, he is whistling up the wrong tree not to say he is misleading us. Trying to graft a modern tragedy onto an ancient epic is bad enough but one should at least choose a story that can resonate with current history.

Troy, Romans, Greeks, Carthage – none of these names appear in the play. We have a burning city and people escaping from it. This is the Fire section of the play. Then we stop at a sandy beach (the Water Section) where a modern couple tells the refugees to go away. From there it is to the Earth section where the refugees try to get past an Immigration Officer. 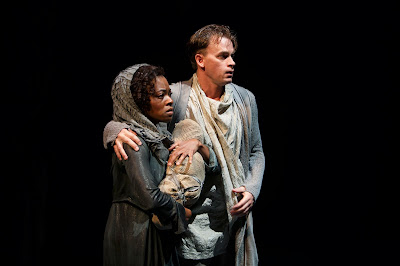 Monice Peter as Creusa and Gareth Potter as Aeneas in The Aeneid. Photography by David Hou.
The penultimate stop is in the Underworld where Aeneas meets his father who tells him where to go – no, in the nice sense. The refugees finally reach their destination in the Blood section, a land of freedom and plenty where they will build something great described at some length.

Kemeid wrote his Aeneid in 2007 and at one point there is a lengthy catalogue of where refugees can be found. The only country not mentioned is Syria because there was no civil war in Syria in 2007.

It does not work. From burning city to sandy beach, we have people with Roman names such as the familiar Aeneas (Gareth Potter) and Hector (Mike Nadajewski) to less familiar ones like Creusa (Monice Peter) Anchises (Michael Spencer-Davis), Ascanus (Malakai Magassouba), Coroebus (Andrew Robinson) and Achmaenidis (Josue Laboucane).

Some of the characters are mercifully listed simply by their jobs such as Hotel Manager (Tiffany Claire Martin), Immigration Officer (Karen Robinson), Scavenger (E.B. Smith) and Old Farmer (Laboucane).

Director Keira Loughran tries to give life to the dreary and confused play without success. If you go back to the check marks for the positive aspects of the play after seeing it, you will discover that there are almost none.

The Aeneid by Olivier Kemeid will run until September 25, 2016 at the Studio Theatre, Stratford, Ontario.
Posted by James Karas at 10:21 AM