The Glimmerglass Festival’s chestnut offering this year is Puccini’s La Bohème. Yes, the one where she coughs in the first scene, dies in the last and there isn’t a dry eye left in the house. And rightly so.

Director E. Loren Meeker and designer Kevin Depinet have set the opera in the Paris of the Belle Époque, the Paris of Toulouse-Lautrec which was beautiful, colourful, and full of life and joy. This is the image conveyed successfully in the Café Momus scene in the Latin Quarter. Depinet makes full and very intelligent use of the small stage of the Alice Busch Opera Theatre to convey a vivacious party atmosphere without the paraphernalia one sees in larger houses. More about this later. 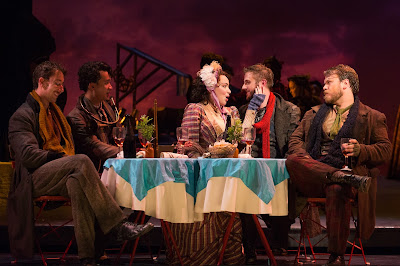 Rhys Lloyd Talbot as Colline, Brian Vu as Schaunard, Raquel González as Mimì, Michael Brandenburg as Rodolfo and Hunter Enoch as Marcello in The Glimmerglass Festival production of Puccini's "La bohème." Photo: Karli Cadel/The Glimmerglass Festival
How about our Mimi? Soprano Raquel González breaks our hearts very easily. Sure her candle goes out and she knocks on Rodolfo’s loft door, but after that she sees what she wants and goes for it. She drops her keys and makes sure her candle stays out. Rodolfo sees what he likes too and a couple of arias and a duet later, it is love at first sight.

González sings sweetly, lovingly, effortlessly. Her outpouring of emotion from “Mi chiamano Mimi” to “Donde lieta usci” to the final love duet is delivered with vocal beauty and deep feeling that goes straight to our heart.

What about the object of her love – Rodolfo? We are not sure about his character, especially his jealousy, but that is not our concern here. Tenor Michael Brandenburg does well in his protestations of love when in the midrange of his voice but he does not always do as well in his high notes. He is quite ardent in the beginning and in the end but what he does well emotionally he does not always match vocally. 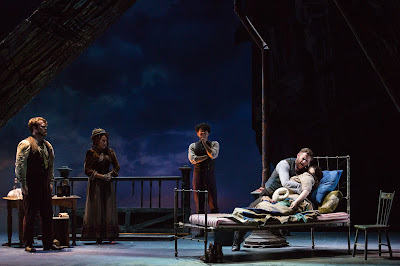 Hunter Enoch as Marcello, Vanessa Becerra as Musetta, Brian Vu as Schaunard, Michael Brandenburg as Rodolfo and Raquel González as Mimì in The Glimmerglass Festival production of Puccini's "La bohème." Photo: Karli Cadel/The Glimmerglass Festival
His loft-mate Marcello, baritone Hunter Enoch, makes a significant vocal impression in the relatively minor role. His voice resonates with emotion and beauty in a fine performance. Bass-baritone Rhys Lloyd Talbot as the philosopher Colline and baritone Brian Vu as the musician Schaunard (both Young Artists) do fine work as Rodolfo’s rowdy but decent friends.

Soprano Vanessa Becerra (another Young Artist on her way up) as Musetta showed spunk and gave us a very vivacious flirt.

The loft of the first act is well-designed with its entrance from a door on the floor. The scene at the gates of Paris is realistic and appropriate. The relatively short scene in the loft where Mimi and Rodolfo meet and go to the café in the Latin Quarter usually requires an interval to change the set. In this production no interval was needed and (the set was changed in a matter of seconds. Bravo for the entire design including the quick change.

Meeker deserves kudos for his conception and execution of this familiar work. He stays the middle course without any off the wall takes and gives us exactly what Puccini intended. A tragic love story, well sung, well done and well wept.
_____

La Bohème by Giacomo Puccini (music) and Luigi Illica and Giuseppe Giacosa (libretto) opened on July 8 and will be performed thirteen times until August 27, 2016 at the Alice Busch Opera Theater, Cooperstown, New York. Tickets and information (607) 547-0700 or www.glimmerglass.org
Posted by James Karas at 11:33 PM