Breath of Kings: Rebellion is Graham Abbey’s adaptation of Shakespeare’s Richard II and Henry IV, Part 1. He edits the two plays so that we can see the essence of both in about three hours including an intermission. Abbey has also adapted Henry IV, Part 2 and Henry V under the title Breath of Kings: Redemption.  The two adaptations can be seen separately or in successive performances at the Stratford Festival.

It is an amazing achievement that makes Shakespeare more approachable without taking away anything essential. Purists will no doubt complain but when you get four plays for the price of two in superb albeit truncated productions you should tone down your criticism. 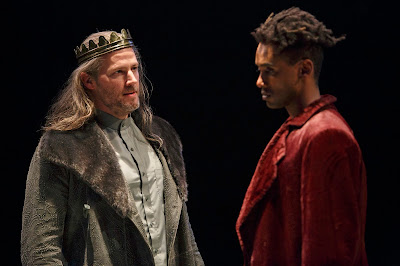 Graham Abbey (left) as King Henry IV and Araya Mengesha as Prince Hal in Breath of Kings: Rebellion.
Photography by David Hou
Richard II is the story of a weak, vacillating king who is convinced that he has been put on the throne of England by God and God alone can remove him. Arrogance without talent is a dangerous mix and Richard suffers the consequences. Tom Rooney in a long robe gives us the arrogance and the ineptness of the pathetic king who, if he did not deserve to be murdered, certainly did not deserve to rule a nation.

Opposing Richard is his cousin Henry Bolingbroke who is exiled and stripped of his wealth by Richard. Graham Abbey as the future Henry IV is self-assured, assertive and commanding. He moves from simply wanting what was taken away from him by Richard to going for the throne.

In the Henry IV, Part 1 Abbey plays the King, troubled by his conscience as the usurper of the throne and by his son Prince Hal (Araya Mengesha) who keeps company with some unsavoury ne’er-do-wells like Falstaff in a tavern. King Henry faces rebels the way Richard II did with the Earl of Northumberland (Nigel Shawn Williams) and his son Hotspur (Jonathan Sousa) leading the rebels.

The contrast between the two young hotheads is central to the play. Hotspur is the paragon of bravery and pride albeit with an uncontrollable temper. Hal is the epitome of a dissolute young man who spends his time in a pub. Mengesha and Sousa are about the same size and the contrast and comparison is striking and they both give fine performances. But let’s do something about their hair. Comb it, give them a haircut, make a wig for them but do something. And while we are at it, Abbey as King Henry IV with his grey wig looks like a leftover hippie from the 1960s.

There is no Henry IV of course without a good Falstaff and Geraint Wyn Davies is one of the best. This cowardly, conniving, womanizing, heavy-drinking and eating, bigger than life man enjoys life and if he never tells the truth he considers it an accomplishment. A memorable Falstaff from Wyn Davies. 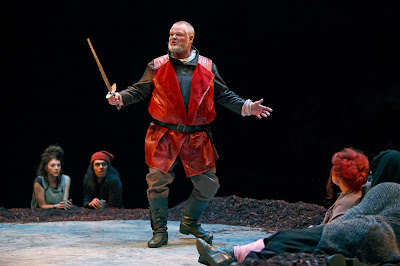 Geraint Wyn Davies (centre) as Sir John Falstaff with members of the company in Breath of Kings: Rebellion. Photography by David Hou.
In Breath of Kings: Redemption Abbey adapts the less successful and less frequently produced Henry IV Part 2 and the martial Henry V in which the warrior king thrashes the French in the Battle of Agincourt. By this time Prince Hal has matured and become a responsible monarch. He rejects Falstaff and his old companions quite brutally and if you listen carefully he may have committed a couple of war crimes but leave that subject alone.

Falstaff and his companions are still with us in Henry IV, Part 2 and we have comic figures like Justice Shallow (Tom Rooney), Justice Silence (Stephen Russell), Mistress Quickly (Kate Hennig), Doll Tearsheet (Michelle Giroux) in Gloucestershire and Eastcheap.

The great humorous scenes of the Henry IV plays with Falstaff are missing from Henry V. The scene where the French Princess Katherine (Mikaela Davies) is taught English is entertaining but there is not much more. Mengesha as Henry V lacks the energy and magnetism of a warrior loved by his soldiers and the scene where he woos Katherine simply flops.

The four plays even as condensed into two have large casts and there is considerable doubling. Directors Weyni Mengesha and Mitchell Cushman have decided to have many of the male roles played by women. In fact most of Richard’s supporters are played by women. Carly Street, for example, plays the Duke of Norfolk, The Archbishop of York, a gardener, Lady Percy, and the Earl of Douglas, the latter with a stupendous Scottish accent. Shane Carty gets to play three noble men and Nym. Michelle Giroux deserves special mention for a fine performance as Richard’s Queen and as Doll Tearsheet though the latter role is more memorable for the juicy name than for the size of the part.

The amazing fact is not the size of the cast and how well they act nor the doubling but the clarity with which the plot lines are delineated. The canvas is quite huge. You need to keep track of the Royal Family of England under Richard II, Henry IV and Henry V, their supporters, their supporters, the rebels and sundry other characters. There are the people of Eastcheap, Gloucestershire, and the French court and so on. Abbey’s adaptations and Mengesha’s and Cushman’s staging manage to keep us in the loop at all times.
There is some loss of energy near the end of Henry V but the adaptations and performances are immensely successful as a brilliant and approachable presentation of four of Shakespeare’s plays.
______

Breath of Kings: Rebellion and Breath of Kings: Redemption by William Shakespeare adapted by Graham Abbey continue in repertory until September 24, 2016 at the Tom Patterson Theatre, Stratford, Ontario. www.stratfordfestival.ca