Along with its extravagant production of A Chorus Line, the Stratford Festival offers Stephen Sondheim’s A Little Night Music at the Avon Theatre as its other musical. It is a well-done production but in the interest of full disclosure I might as well start with an admission that I have not been able to warm up to the musical.

A Little Night Music strikes me as a French farce for intelligent people with characters of a certain age. It is based on Ingmar Bergman’s film Smiles of a Summer Night. With some significant exceptions, I find that there is an excess of recitative and many songs that I simply tolerated. 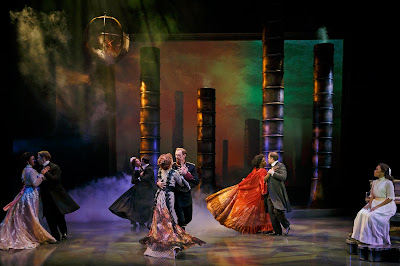 Members of the company in A Little Night Music. Photography by David Hou.
Some of the people in the musical have had a glorious life (?), some think that they still have it, only to discover that they may be wrong and some are just starting to live. Madame Armfeldt (Rosemary Dunsmore) from a wheelchair wistfully remembers the “Liaisons” of her youth that provided her with wealth for her old age. She cashed in her assets but now she wishes she had married for love.

At the other end we have the seminary student Henrik (Gabriel Antonacci) who is not sure what to do with his hormones and is the sourpuss of the group. He does find his way, so to speak, with his 18-year old virgin stepmother Anne (Alexis Gordon). She is an airhead who has been married to Henrik’s father Fredrik (Ben Carlson) for eleven months and the sexual relationships in this house are summarized in three songs: Anne promises to do it “Soon”, Fredrik sings “Now” and Henrik says “Later.”

The centerpiece of the musical is the well-named Désirée (Yanna McIntosh) who is both desired and desiring but perhaps past her best before date. Right now she is desired by Fredrik and Count Carl-Magnus Malcolm (Juan Chioran), a tall and handsome dragoon right out of an operetta. Carlson can act marvelously but singing is just not his forte. Chioran is custom-made for the role, theatrically and vocally. Yanna McIntosh handles her part with splendour.

To cut to the chase, the Count and Fredrik in compromising attire find themselves in   Désirée’s bedroom. The Count challenges Fredrik to a duel. The Countess (Cynthia Dale) finds out about her husband’s infidelity and we are off into the stratosphere of adultery. 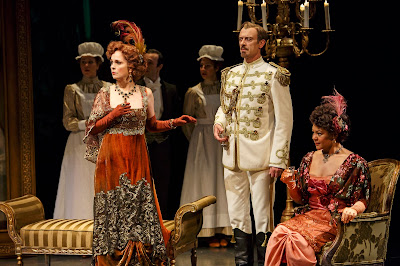 Members of the company in A Little Night Music. Photogaphy by David Hou.
Not quite. The Countess and Anne sing “Every Day a Little Death,” a somber view of life stated in the title. Dale and Gordon do well with the song which manages to be beautiful with limited vocal demands.

The highlight of the musical is the great song “Send in the Clowns.” It comes near the end when Fredrik is in Désirée’s bedroom. The song is contemplative, reflective, sad, ironic, introspective, almost self-mocking - fantastic. She wants to turn a page on a life of love affairs or sexual liaisons and settle with Fredrik who happens to be the father of her daughter. But they are on different wavelengths. The show of their lives is not going well. She is on the ground; he is in midair. He does not want what she wants. Someone should send in the clowns to entertain the audience as they do when a show is going badly. But, in the last verse, she tells us there are no clowns to send – they are the clowns.

The song hangs above the show like a chandelier made of diamonds. McIntosh sings the melody gorgeously and the song raises the musical from a Broadway hit to a work of beauty.

A Little Night Music has a considerable amount of humour and director Gary Griffin does only moderately well in evoking laughter.

The set designed by Debra featured four tubular structures that struck me like smoke stacks. The dresses were beautiful.
_____

A Little Night Music by Stephen Sondheim (music and lyrics) and Hugh Wheeler (book)) continues in repertory until October 23, 2016 at the Avon Theatre, Stratford, Ontario.