You look at the 2016 list of productions at the Stratford Festival and see Shakespeare (4), musicals (2), classical (3), modern (3) and a World Premiere (1). You applaud enthusiastically. Then you see Shakespeare in Love in a North American Premiere. Is that the 1998 movie with Gwyneth Paltrow and Joseph Fiennes adapted for the stage in a moment of desperation and utter failure of original creativity?

Well, eat your words and your ham sandwich and treat yourself to a literate, hilarious and thoroughly enjoyable romp in Elizabethan England. Yes, Lee Hall has adapted Marc Norman’s and Tom Stoppard’s screenplay but he has done an expert job of contraction and conversion without taking anything away from the original and indeed adding something to it. 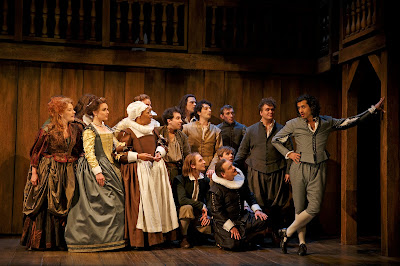 Members of the company in Shakespeare in Love. Photography by David Hou
The main plotline involves the beautiful Viola (Shannon Taylor), the daughter of Sir Robert de Lesseps (Michael Spencer-Davis) who has money but no social status. He wants her to marry the boorish, titled but broke Lord Wessex (Rylan Wilkie). She loves poetry, the theatre and acting which lead her to the theatre and into the arms of the upstart playwright from Stratford-upon-Avon.

The play moves quickly through the theatrical world of 1590’s London where we meet familiar names like Marlowe, Alleyn, John Webster, Henslowe, Burbage and a number of fictional characters. Backstage rivalries, auditions, theft of scripts, financial skullduggery and performance terror all combine to produce laughter and simple joy, all associated with the love of theatre and poetry.

Luke Humphrey as Shakespeare has a writer’s block can’t write a single line of a sonnet or come up with a scene for his new play Romeo and Ethel, the Pirate’s Daughter which he has sold to two producers. Enter Thomas Kent who turns out to be the lovely Viola who can read poetry. Humphrey gives us all the energy, guile and even deviousness that Shakespeare needs to survive in the rough and tumble world of the theatre.

Shannon Taylor reminds us (not that we need it) why we are in love with Shakespeare’s poetry as we admire her pluck and intelligence as a true lover of theatre and language. No wonder Shakespeare falls in love with her.

There is no shortage of characters and superb actors who portray them that make us laugh. Stephen Ouimette is hilarious as the producer Henslowe who has to pay up for money that he borrowed to avoid further methods of persuasion (a.k.a. torture) by his lender Fennyman. Poor Henslowe gives a role to his tailor who has a serious speech impediment and cannot utter a line. Reason: he owes him money.

Fennyman the money lender (played superbly by Tom McCamus) may be a thug but he is a funny one especially when he is given a part in a play. 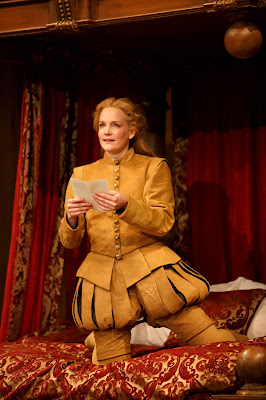 Shannon Taylor as Viola de Lesseps in Shakespeare in Love. Photography by David Hou.
Shakespeare’s rival and at the time superior playwright, Christopher Marlowe (Saamer Usmani) is a sneaky presence who nevertheless helps the bard. In the end in a “Salieri killed Mozart” scenario, Shakespeare feels that he caused Marlowe’s death.

The egotistical actors Alleyn (Brad Hodder) and Burbage (Steve Ross) are there as is the creepy and bloodthirsty John Webster (Tal Shulman). There is an assortment of characters that are on stage creating the excitement and energy we imagine happening backstage when everything goes wrong with a performance. It is splendid ensemble acting.

Paddy Cunneen adds some lovely songs based on verses from Shakespeare’s plays and sonnets and Jane Gibson provides the choreography.

Shakespeare in Love opened in London in 2014 directed by Declan Donnellan and that production has been imported for the play’s North American premiere at Stratford. Designer Nick Ormerod provides a wood-paneled backdrop with a balcony and moveable panels for the change of scenes such as the introduction of the bed, the entry of the Queen and the indication of action behind the curtain. It is excellent for quick scene changes in a play that is fast paced.

What can one say about a play that covers Shakespeare, love, laughter, theatre, and a “familiar” setting no matter how fictional?

Shakespeare in Love based on the screenplay by Marc Norman and Tom Stoppard, adapted for the stage be Lee Hall continues in repertory until October 26, 2016 at the Avon Theatre, Stratford, Ontario. www.stratfordfestival.ca
Posted by James Karas at 11:48 PM