A WOMAN OF NO IMPORTANCE – REVIEW OF 2016 SHAW FESTIVAL PRODUCTION

The Shaw Festival in its fine production of Wilde’s A Woman Of No Importance manages to gives us two shows for the price of one. We get Wilde’s play, of course, full of aphorisms, balanced phrases and witty lines. But we also get a fashion show designed by Michael Gianfranceso based on Cecil Beaton’s designs.

Director Eda Holmes sets the play in England in 1951 where the upper class is reestablishing its fashionable dominance in London after the grim years of World War II. 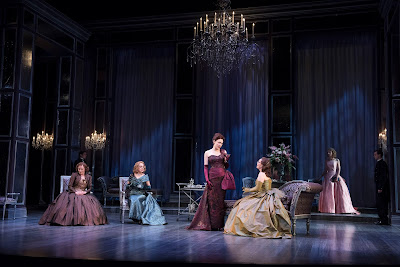 Wilde sets up issues of high-toned morality and religion in a social class that is concerned mostly with its own entertainment. Lord Illingworth (Martin Happer) is rich, amoral and wants to enjoy life, especially women. He does have a secret that will visit him soon (no, it will not come to haunt him) but in the meantime he appoints Gerald Arbuthnot (Wade Bogert-O’Brien) as his private secretary.

The magnificently dressed ladies (the men are nicely dressed too, but who gives a hoot about them) are gathered on the terrace of Huntstanton Chase for the play and the accompanying fashion show. The set for the opening scene consists of an ugly curtain that looks like it was hastily hung up by stage hands on Sunday morning. Happily it is the only ugly part of the stage design and it disappears after Act I.

If you want high morality straight from the mouth of an Old Testament patriarch just listen to Mrs. Arbuthnot (Fiona Byrne). She believes in Original Sin which condemns all and is passed from generation to generation. Her reference is personal but her high-toned morality is intact. Unlike the fashionably attired ladies, Mrs. Arbuthnot wears a tasteful but by no means haute couture dress and she has a lot to be angry about. Byrne’s characterization in the end comes out as more forceful and righteous than pretentious and self-righteous. 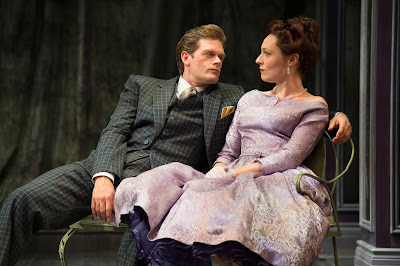 We have Hester Worsley (Julia Course), the American millionairess, whom we like even after she is called a Puritan but I am not sure why she does not speak with a clear American accent. Claire Jullien as Lady Stutfiel has a nice dress but ugly glasses and no doubt there is a reason for that.

Fiona Reid provides much of the laughter as Lady Huntstanton who is not too swift and admits it but can deliver lines with perfect intonation and spot-on pauses that are simply a delight. Mary Haney as Lady Caroline Pontefract is also funny.

When we are not watching the fashion show, we pay attention to Lord Illingworth, Mrs. Arbuthnot and her son Gerald Arbuthnot with meaningful glances towards the lovely Hester.

They will enjoy Wilde’s wit, Eda Holmes’ fine directing, get a lot of laughs and a fashion show and discover who is who and get a fine night at the theater.

A Woman of no Importance by Oscar Wilde continues until October 22, 2016 at the Festival Theatre, Niagara-on-the-Lake, Ontario. www.shawfest.com.
Posted by James Karas at 4:44 PM