AIDA - REVIEW OF GOLD AND IRONY PRODUCTION BY PARIS OPERA

Olivier Py has directed an unorthodox and jaw-dropping Aida for the Paris Opera at the Bastille that combines outstanding singing and stupendous directing. The modern-dress production starts with flag-waving and a concentration on burnished gold and ends in debunking war and its “glory”.

Let’s start with the renowned Triumphal March. The Egyptian army under Radames has defeated the Ethiopians and the victors are returning with glory, spoils and prisoners. The orchestra led by the trumpets plays the stirring march as the victorious Egyptians parade triumphantly in front of cheering crowds. Elephants, horses and practically whole zoos have marched across the stage in a show of splendour, glory and, one must add, unlimited opera company budgets. 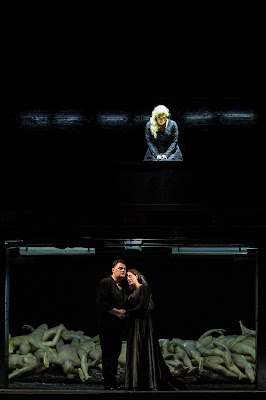 Py gives us nothing. He takes a vehemently anti-heroic and ironic view. As the trumpets are blaring the stirring music, we see a small triumphal arch with a half-naked torso on top waving a machine gun. Some cleaning ladies are cleaning the gold arch with mops. No victorious soldiers, no defeated prisoners, no spoils of war, no animals, nothing. A ballerina dressed in white does some dancing.

As the orchestra continues to play the march, the stage floor is raised and a subfloor appears. It is full of corpses, and soldiers wearing masks are tossing more dead bodies on the pile. This is the Egyptian triumph.

At the end of the triumphal rituals, Amneris is supposed to put a crown on Radames’s head. She does not. As the celebration continues, Egyptian soldiers using the butt of their machine guns rough up the Ethiopian prisoners and one of them is in fact knocked down and kicked. We see a picture of a bombed city projected on the rear of the stage several times during the performance. This is the result of the Egyptian victory.

Py and Set and Costume Designer Pierre-André Weitz use gold insistently for all the sets. But the use is ironic because there are cleaners on a number of occasions who spend some time cleaning and burnishing the gold with their mops. It may look like gold and glitter like gold but it mocks Egypt rather than praise it.

The soldiers wear khaki, frequently only on the bottom half of their bodies, the King and Radames have officer’s uniforms and the High Priest is dressed in the full regalia of a pope. Py does not stop there. When Radames is being tried, there is a burning cross on stage and the judges appear in Ku Klux Klan hoods. The women are dressed in black.

The singing is simply outstanding. Canadian soprano Sondra Radvanovsky sings and acts an Aida that does not miss a note. She owes duty and loyalty to her father Amonasro, the captured Ethiopian King and her beloved country as well as to Radames the man she is in love with. She pours out all her feelings in an unforgettable performance.

Tenor Aleksandrs Antonenko makes a superb Radames. His light tenor voice serves him well for “Celeste Aida” to the final duet where the couple finds apotheosis in love.

Antonenko is an impressive and sonorous Amonasro full of hatred and guile as he convinces his daughter to force Radames to betray Egypt.

Anita Rachvelishvili is an outstanding Amneris, the princess who hopes to win the hero Radames but cannot defeat the love of Aida.

The Chorus and Orchestra of the National Opera of Paris are conducted by Daniel Oren with robustness adding to Py’s ironic approach to the opera.

This is a supremely well-sung production that has a potent point of view that is brilliantly expressed.
Posted by James Karas at 2:06 AM