Directed by Polly Findlay
Designed by Helen Goddard
Original Prologue and Script Revision by Stephen Jeffreys
Continues in repertory at the Swan Theatre, Stratford-upon-Avon, England.
http://www.rsc.org.uk/
***** (out of five)

The Alchemist by Ben Jonson is universally accepted as a comic masterpiece but it is a long play and not always easy to absorb all of which provide bad reasons for not producing it very often, especially in Canada.

The Royal Shakespeare Company never shows such squeamishness and it has staged a splendid production of the play in the Swan Theatre in Stratford-upon-Avon. It is directed by Polly Findlay with script revisions by Stephen Jeffreys. 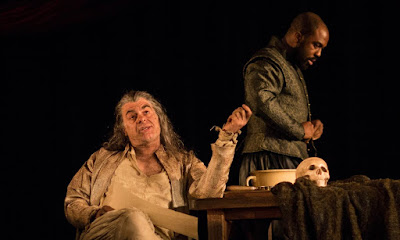 Mark Lockyer as Subtle and Ken Nwosu in The Alchemist. Photo: Helen Maybanks
How do you get what may seem musty and lengthy and make it into a hilarious night at the theatre? If it is too long, you make it shorter. If it seems musty, you blow away its mildew with deletion of incomprehensible references and make judicial changes to render the piece completely intelligible to those who have not studied the text in school. Note the word judicious. The leap from judicious to self-indulgent can land a director and dramaturg on a slippery slope and they can slide into the hoary miasma of egocentricity where they think they can outdo instead of enhance the author.

Findlay and Jeffreys have chosen the judicious route. The Alchemist is about one of the oldest and most reliable subjects of comedy: greed, the crooks who are prepared to dupe the greedy and the greedy who are blinded by their cupidity and become easy victims.

Mark Lockyer as Subtle the alchemist is a chameleon who can convince a knight that he can convert ordinary metal into gold, a tobacconist that he can become a successful businessman and a widow that she can marry a duke. He has Dol Common (Siobhan McSweeney) and Face (Ken Nwosu) as his partners and their names describe their characters. They all display mental and physical agility as they deceive their avaricious visitors and argue among themselves lest we consider them better than their dupes. These are people to laugh at and actors to applaud.

The customers are a varied and colourful bunch who deserve what they get. The pathetic Abel Drugger (Richard Leeming) and the ridiculous Kastril (Tom McCall who is allowed to overact to his heart’s content) are easy targets. The knight Sir Epicure Mammon (Ian Redford) who covets gold, pastor Tribulation Wholesome (Timothy Speyer) and deacon Ananias (John Cummins) are classic characters, sharply described in their names and with actors to represent them wonderfully. 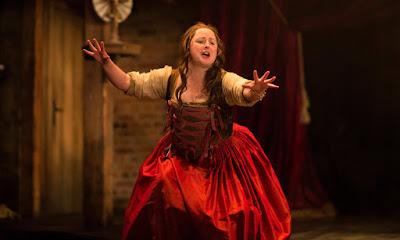 Siobhan McSweeney as Dol Common. Photo: Helen Maybanks
We also have the lawyer’s clerk Dapper (Joshua McCord), the gamester Sir Pertinax Surly (Tim Samuels) who wants all the money in the world and the attractively named and fetching Dame Pliant (Rosa Robson) who has the additional and highly desirable qualities of being a widow, rich and not too swift.

This is the world that Jonson created and Findlay recreates with vigour and fine acting. The duping trio take advantage of a plague that has driven the owner Lovewit (Hywel Morgan) of the house in London to the country. They need to work quickly and efficiently before Lovewit returns and cover their tracks when he does. He does return unexpectedly and the rest is comic chaos.

Designer Helen Goddard keeps stage props to a minimum but there is a trapdoor, some explosions, smoke and use of balconies to create energy and havoc.

Ben Jonson’s play and this production, as all great comedy must, go back to the roots of theatre and the world of today, to give us a great night at the theatre.
Posted by James Karas at 9:57 AM