The Taming of the Shrew is not an easy play to produce and every director must find a way of dealing with its disgusting misogynist and the cruelty and humiliation meted on Katherine “the shrew” by the obnoxious Petruchio.

Director Caroline Byrne’s approach to the play is to set it in Ireland at the time of the Easter Uprising in 1916. Katherine would have been right at home in the misogynistic society of Ireland but the point is that the men who issued The Proclamation of Independence were well aware of the position of women and promised them equality. They delivered nothing. 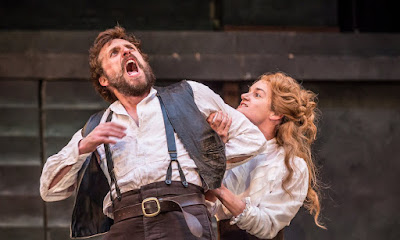 Edward MacLiam as Petruchio and Aoife Duffin as Katherine.Photograph: Marc Brenner
Byrne delivers a boisterous, rambunctious and wild production that is highly physical and never hesitates to use the audience to provoke laughter. One character borrows a bottle of water from a yardling, for example, drinks a bit and pours the rest on another character.

There are Irish ballads to lighten the mood and some choreography including a wedding with a priest and confetti being tossed at the couple.

There is no shortage of cruelty towards Katherine when Petruchio tries to “tame” her and we can rationalize his conduct as being cruel to be kind or that she will eventually gain the upper hand after he is through with his “taming” and she pretends to be tamed. That is nonsense, of course, and perhaps simply wishful thinking to defend the indefensible.

Kathy Rose O’Brien is a spirited and at times a ferocious Katherine. We do believe that in the end she will take the upper hand with her husband or that love will prevail and the taming will have been unnecessary. We laugh so much and we worry or should worry that we may seem to be condoning Petruchio’s cruelty.

Edward MacLiam is a robust and blustering Petruchio whose Irish lilt makes it almost impossible to dislike him. Genevieve Hulme-Beaman’s Bianca is attractive without being insipid and I find that preferable to her appearing as a wimp. She has to use some trickery, after all, to get her man. The servants Tranio, Biondello, and Grumio are played by women for no apparent reason and surely there is no need for one. They do terrific work.

Byrne and her Dramaturg Moma Regan have done away with the scenes with Sly that open and close The Taming which is a play-within-a-play. Regan is responsible for the lyrics of the songs.

The issues that the play illustrates remain but we do get a terrifically funny production of a play and a superior night at the theatre.
Posted by James Karas at 12:20 PM