Jules Massenet’s Werther starts with a Christmas carol being rehearsed in July and ends with the same carol being sung in December. In between there is high emotion and distraught, unrequited love that results in suicide. That is what sensitive poets did when they fell hopelessly in love and the woman of their soul’s passion was beyond attainment. Well, that’s what happened in the imagination of writers like Goethe in the 18th century but there were also some real life stories. 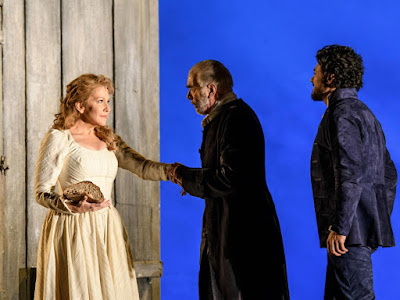 Joyce DiDonato, Jonathan Summers and Vittorio Grigolo
Werther is a Romantic poet who meets the beautiful Charlotte and he is done for. No sooner does he arrive on the scene than he bursts out with "O Nature, pleine de grâce". He attempts to declare his love to Charlotte only to be told that she is promised to Albert.

There is nothing but despair for Werther. Albert marries Charlotte and Werther sings "Un autre est son époux!" and from there it’s thoughts of suicide: "Lorsque l'enfant revient d'un voyage."

Charlotte has her share of emotionally supercharged singing especially in the Letter Scene and of course the final exit.

I mention these to point out that this opera is an emotional ride that is not easy to take without star-quality singing, Werther the opera may encourage thoughts of Werther the man in the audience. Bur the Royal Opera House would not allow that and for the current revival of  Benoît Jacquot's 2004 production it has struck gold. 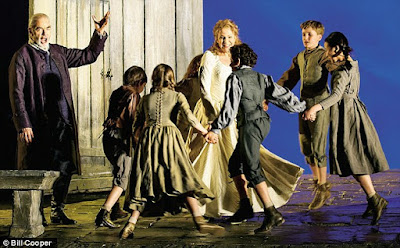 The Bailli and his family having fun.
The star power is provided by Italian tenor Vittorio Grigolo and American mezzo soprano Joyce DiDonato. Star power is a relationship between audience and singers that turns the potentially lachrymose into the beautifully emotional. It makes you forget the creaky plot of the opera. Grigolo light and agile voice brings splendour and DiDonato is unassailable in her singing of Charlotte, the woman who loves Werther but cannot requite his passion because her high moral standards.

Baritone Jonathan Summers was a resonant and sympathetic character as the Bailli. Serbian baritone David Bizic retains his dignity despite his rising jealousy about his wife and his singing is excellent.

I cannot be as effusive about the set in the first scene. It takes place in the Bailiff’s house where his children are practicing Christmas carols. Are they in the house or in the yard? The set shows a huge gate that looks like the opening to a barn. There is no warmth or homey feeling. The indirect lighting does not help.

The second scene near the church shows a wide-open vista that is quite impressive. The third scene in the wood-panelled room gives a sense of affluence and comfort. The final scene is in Werther’s claustrophobic lodging and it is suitable.

Massenet’s through-written music is full of emotional intensity, lyricism and longing and Antonio Papano and the fine-tuned ROH Orchestra do not miss a beat.

In short, you get a first-rate production of an opera which has some virtues no doubt but it is doubtful it works its way into the souls of many operaphiles as an absolute favourite.
Posted by James Karas at 2:01 PM