The performance finished at about 1:10 in the morning and at 3 hours and 40 minutes that is approaching Wagnerian duration. The singers, the chorus, the conductor and the orchestra all received enthusiastic ovations. The director and the creative team walked on the stage and were greeted with resounding and extended boos.

We were watching Mozart’s delightful Cosi Fan Tutte, the opening production of the 68th edition of the Festival d’Aix-en-Provence in that beautiful medieval city.

Opera directors in general and European ones in particular have for some years now been pushing the envelope as it were in producing classic works in most unlikely versions. Wagner’s Ring in a gas station, Rigoletto in Las Vegas, Zaide in a third-world sweatshop, The Abduction from the Seraglio set among the jihadists and ISIS are just a few examples that come to mind. 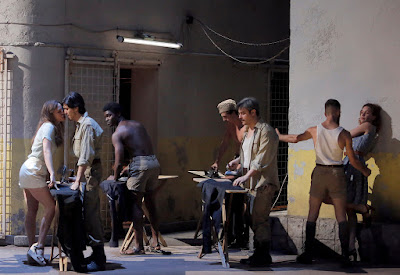 A scene from Cosi fan Tutte?
As the curtain opens we are ready for a new production of Cosi directed by Christophe Honoré, known better as a writer and film director and fairly new to opera. But instead of hearing the lilting and uplifting overture played by the Freiburger Barockorchester under Louis Langre we listen to some strange song played on an old turntable. There is a rundown building and a fire burning in a cutoff barrel. We see a couple of white men milling around and abusing  a couple of black women. Abusing consists of manhandling, grabbing and in one instance pulling the woman to the side and …well, was she just sitting on his lap or was she being quietly raped?

The setting is a colonial village somewhere in Africa. The soldiers wear fezes but the natives are black so you can decide where we are. The only way to treat the natives, especially the women, is by pushing, grabbing them by the hair, shoving them to the side or hitting them. None of the colonial overlords need mistake them for people. Without putting too fine of a point on it, the locale is a slum.

Oh yes, Mozart’s opera. To jog your memory, Ferrando and Guglielmo who are not black, live in that village and are madly in love with the sisters Dorabella and Fiordiligi and swear that their loves could never be unfaithful to them. Their older and wiser friend Don Alphonso is willing to bet that, yes, they can and will be unfaithful because cosi fan tutte, all women are like that. 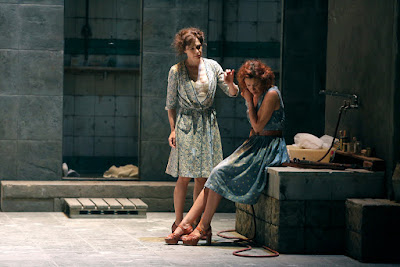 Dorabella and Fiordiligi at home?
The ruse is to send the men off to war and have two Albanians (Guglielmo and Ferrando in disguise) visit and successfully court the ladies. Don Alphonso is assisted in his plot by the clever and lovable servant Dorabella.

Back to the slum, please. The question is: what is the relationship between Mozart’s music, Lorenzo da Ponte’s libretto, the social stratum in which the story takes place and a slum in colonial Africa? Can the two be made to coexist? Can you superimpose a foreign culture of cruelty, abuse, inhuman treatment of natives on an opera that deals with love, humour and some silly game-playing by people who have not much else to do?

If Honoré wanted to draw attention to himself, he has certainly succeeded. Many reviews may be similar to mine and talk mostly about him. Did I mention the wonderful singing? Soprano Lenneke Ruiten as Fiordiligi and mezzo soprano Kate Lindsey as Dorabella are lithe young singers with supple voices and physical agility. They would have delighted us if only they had not moved to the slums and adopted the dress code and some of the manners of that world. They have servants including the white Despina of Sandrine Piau who usually enchants us. Again her singing and acting are superb but what is she doing in that milieu?

Guglielmo and Ferrando are transformed into unrecognizable Albanians by making the black. Bass di Pierro as Guglielmo and tenor Prieto as Ferrando were youthfully arrogant and emotional as becomes lovers and vocally expressive as Mozartian singers should be. Don’t worry about the black make-up. Gilfry as Don Alfonso missed a couple of beats but he straightened out and joined the crowd in bad manners but good singing.

Conductor Louis Langrée and the Freiburger Barockorchester stuck with Mozart and they were a delight to hear.
__________

Cosi Fan Tutte continues at the Théâtre de l'Archevêché until July 19, 2016 in Aix-en-Provence, France.  http://festival-aix.com/
Posted by James Karas at 11:04 AM