The play tells the story of the cursed Royal House of Thebes from the abdication of Oedipus upon finding that he was married to his mother and had two sons by her to the start of the tragedy of Antigone. Oedipus’s sons Eteocles and Polynices have agreed to rule Thebes on alternate years. But when Polynices’s turn comes up, Eteocles refuses to give up the throne. Polynices asks for the help of the state of Argos and lays siege on his city. 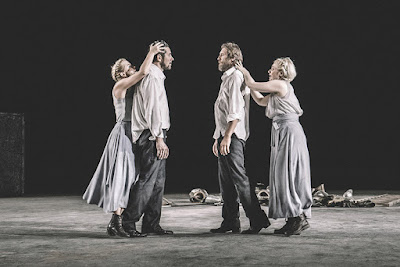 The production in the Dassous Theatre (Forest Theatre) is directed by Lithuanian director Cezaris Graužinis who puts his own imprint on the play.

Yannis Stankoglou and Christos Stylianou alternate in the roles of Eteocles and Polynices. Polynices is not a character in the play but Graužinis has added him as a silent role for dramatic purposes. The director sees Eteocles as an egotistical dictator, full of bombast and patriotism with some awareness of his family’s curse who knows that both brothers must die. He prays fervently to the gods to save his city, the home of Greeks and a place of worship, from the enemy. He seems to have little conception that he is the direct cause of the attack, that the Argive attackers are also Greek and that Polynices has every right to demand the throne of Thebes. This is a civil war.

Graužinis handles the Chorus of Theban Virgins imaginatively and effectively. They sing, speak separately and in unison, perform some dance routines and end up as a most effective part of the play. There is some musical accompaniment (composed by Dimitris Theoharis) that enhances this superb handling of a difficult part of Greek tragedy.

Giorgos Kafkas has the difficult role of Messenger who must give lengthy descriptions of events. Kafkas delivers his lines with sufficient modulation to keep them interesting without straying into unacceptable intonations. The director helps a great deal, as described below.

Alexandros Tsakiris dressed in while played the Herald, a relatively minor role except near the end when he engages with Antigone.

The Messenger describes the heroes who lead the Argive forces against the seven gates of Thebes. Eteocles must choose six of the best Thebans and assign a gate to each of them with him taking the seventh gate. Here Graužinis takes over and he illustrates the description of the Thebans leaders. He presents them as comic figures that are creatures more out of burlesque than tragedy. One of them comes out on crutches and a comic helmet, another has a horn in his mouth, another brandishes a sword that he can hardlee handle. This is Aeschylus turned on his head. 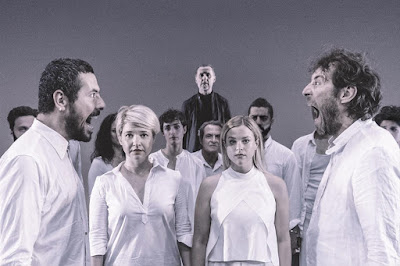 A stash of war materiel is emptied from a box - helmets, swords, shields, a shotgun, a drum – and the Chorus and the Theban generals pick them up and do a comic romp. These are the defenders of Thebes.

Near the end, Polynices appears and he fights with his brother. This is the climax of the play and the director’s brilliant invention. Initially they both hold cymbals and then discard them and finally fight by rushing at each other and embracing. The embraces become more violent until the men stop. The two brothers are dead but they are standing up in each other’s arms. A stunning visual representation of the tragedy of the brothers, of the result of civil war and of the fate of the Royal House of Thebes.

At the end Antigone and Ismene, the sisters of Eteocles and Polynices appear. They are represented by two members of the Chorus and the groundwork is laid for Sophocles’ Antigone where she disobeys the order not to bury her brother Polynices. The scene seems to be almost certainly a later interpolation but we may never know how Aeschylus ended his play. What has come down of the Seven is in pretty bad shape and about a third of it is corrupt.  As a result the last part of the play is the least effective. The play is over when the brothers are dead and a choral section would be the appropriate way to end it. Here we get some padding that we could do without but there is not much we can do about the shape of the play now.

The set by Kenny MacLellan consisted of the semi-circle of the stage with a single stool and a couple of ladders. One of the ladders was used for Eteocles to climb on and address the Thebans. The stash of war materiel was the only other props required. The men were dressed in modern suits and the women in simple dresses that may or may not be representative of modern Theban virgins.

Edi Lame’s choreography and movement was imaginative and effective.

The theatre is on a hill and holds almost 3900 spectators and it was about two-thirds full the evening that I was there. They do not so much charge for tickets as give them away. Students, seniors, the unemployed get in for €5. You may have to pay as much as €12, if I am not mistaken!

There are a couple of dozen vendors outside and a few inside the theatre selling food and drinks from bottles of wine to fruits and nuts and Styrofoam mats for sitting on top of the concrete, backless seat. I am not sure if smoking is allowed during the performance, but people puffed freely.

Under the clear, starry sky of Thessaloniki with a cool breeze blowing from the Thermaic Gulf and a superb production of a play, this was a memorable night at the theatre.
Posted by James Karas at 10:43 AM